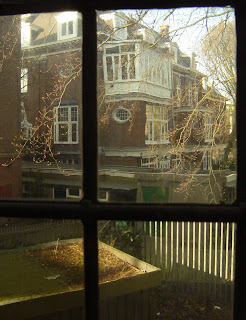 After two weeks of not having access to this blog, I got an email this morning explaining what had happened and giving me a solution. This is a completely different situation than following all the links provided behind that toxic looking red page that was here for two weeks or looking on the Blogger Discussion boards and Forums. That was sort of a waste of time. It was just a bunch of dead ends and circular questions.

Here's what happened in a nutshell.

About a year ago, I installed a counter - a "goodcounter" counter. Apparently, it contained some "malware" or "badware." Possibly, it wasn't goodcounter, but godcounter, which is a bad site. Two weeks ago, a computer did a sweep of my blog and found something suspicious. My blog was immediately "trashed" and the red page went up. (Sorry if you missed the red page. It was alarming. Be glad you missed it.) I had no access to the template, all of my posts, etc. It was just gone.

As I said, I tried forums, I tried other online groups, there were no answers. And I have to say that I was given the same suggestions several times. It was terribly frustrating. It was apparently a road that no one had gone down before - although in my belief system that really doesn't happen. So I was forced to write a letter on paper and use a stamp. Yes, Virginia, they still make paper, envelopes and stamps. You just have to look.

I wrote a letter to Bradley Horowitz. He's one of three Vice Presidents in charge of Production Management. The address of the corporate office is: 1600 Amphitheatre Parkway
Mountain View, CA 94043. I told him what had happened with my blog and that their system for resolving this situation didn't work. I also CCed that letter to the two other Vice Presidents in charge of Production Management, a Senior Vice President, the two Co-founders, and the Eric Schmidt, the Chairman of the Board and CEO of Google. I sent seven letters off - at €1.90 a pop - and waited.

This morning I got a very nice, apologetic email from a guy named Rick, a Business Product Manager for Blogger, who was given the assignment of dealing with me. He "untrashed" my blog so that I had access to it. I inserted the code to verify that it was my blog, I looked around for the bad code (didn't find it) and I asked for a reconsideration and the blog was back up in minutes.

So Blogger came through. Thank you Blogger. Their current system for resolving problems like mine is totally f-ed up, but apparently they know it now and are trying to do something about it.

That said, after not having a blog for a few days, I decided to take my domain name and go to another site. It's self-hosting and there are other reasons for the move. I'll keep this here, but my new stuff will be there. Come visit me at my new home.

And if you have a Blogger blog, it's fine. Don't worry about it. It's run by Google and they're a completely competent company. If there's a problem, keep pressing them about it. Write a letter. They're good people. They'll help.
Posted by Andy Baker at 1:12 PM

Well thank goodness for that! I kept checking daily to see if your blog was back! Then, yippee, today here you are!

Lovely to have you back with us Andy!! Missed your blog :(

I will check out your new blog now....

Andy, I know I am totally random and not anyone you have ever met, but I want you to know I have been very very sad that your blog was gone and was afraid I would not find you again. I'm sure my family thought I was nuts. Anyway, it was such a relief when your blog popped up this morning.

What a shame it took them a fortnight to sort it out. Nice to have the old archive back, though.

oh what an ordeal!! Stuff like that is SO frustrating. Glad you're back, though!

I'm so pleased we still have access to your archives! There are so many great pictures of weird things on here.