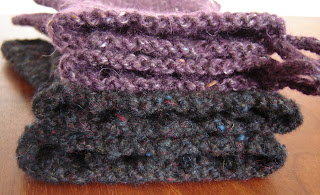 I just finished two pair of fingerless gloves. I had the "assignment" of making four pair and I was finished making all four before we left for vacation this summer. But then I had the embroidering to do, which I wasn't thrilled about - because I didn't know how to do it. So I put off finishing them.

Then, when my sister, Kathy, was here for the wedding, she looked at two of the pairs and told me they were too small, so I had to re-knit them. I put it off until a week ago. I had to knit a new pair for my niece, Alyssa. And then I had to embroider them, plus I had to embroider the pair that were already finished - the ones for my oldest nephew, Michael. 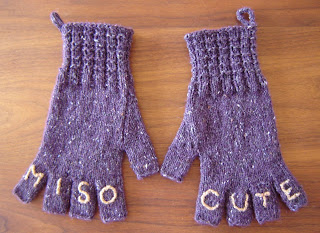 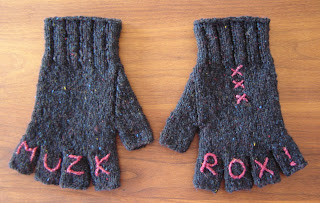 I asked Kathy what - if anything - I should embroider on the knuckles. She suggested these phrases. Fred doesn't care for the writing on the fingers. (That's fine because these are not for him.) But I wanted to do it. I'd never done embroidery. I enjoyed it much more than I thought I might. (I also just learned the chain stitch, which I'm looking forward to using.)

One thing that I like about this particular kind of embroidery is that it stands up above the fabric. 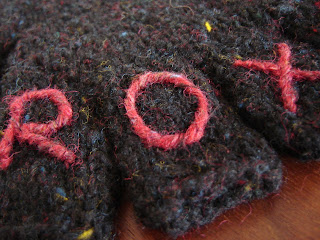 And it's pretty tightly wound, which I can appreciate. 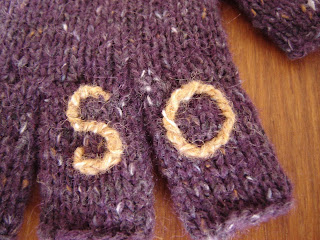 I like the colors I used. They stand out pretty well against the fabric of the gloves. I just used tweed, not embroidery thread. One additional "design element" that I added was three X's to represent Amsterdam. I like it. It's simple and subtle. And I think it'll read as "racy" in Texas - or it would have in my time. 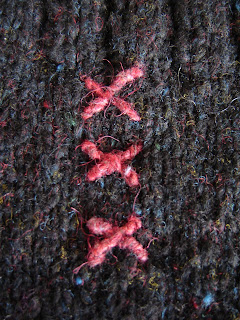 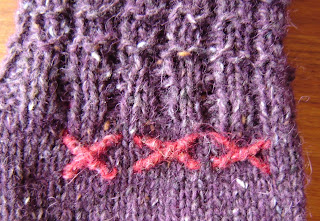 I finished the purple pair with a sewn bind off. All I'll say is that I'm sort of crazy about the sewn bind off now. It's really flexible. I look forward to binding off the pair I'm doing now for the middle nephew, Ben. (I just cast on the fingers today.) There's one more pair - the ones for my youngest nephew, Jonathan. I think I'm going to be creative with those.

Incidentally, the Dutch word for gloves is handschoenen, which literally translated means "hand shoes."
Posted by Andy Baker at 11:23 PM

okay,t hose are the cutest gloves ever! 'Miso Cute'?! Aww, they are all kinds of wonderful!!

What does "miso cute" mean?

Actually, what I really want to know is why I have to put up with sitting next to you at every choir practice, and yet you still haven't knitted any gloves for me...

The gloves arrived yesterday and the kids LOVED them! A cold front came through last night so this morning the kids could wear them to practice at 6:30 this morning. Of course, cold front or not, they would have had them on - because you made them and you are COOL!! I love you - Kath