R is for Rest 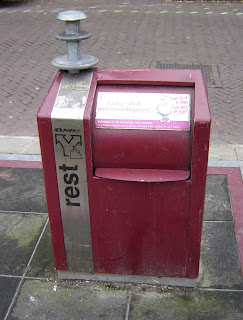 I first started recycling in NYC when a friend of mine was over and gave me such attitude (as he hissed and rolled his eyes) while saying, "You don't recycle?" It was if I was hanging out the window spraying aerosol deodorant directly into the atmosphere. It was as if I was pouring motor oil into the storm drain. He convinced me right there that I was helping to choke Mother Earth by not putting those aluminum Chinese food containers in the recycling bin.

And thanks to Tim, who I have lost touch with, I have been a recycler since. I did a lot more in NYC. Aluminum cans got recycled there. It was sort of a mess. You could throw everything into one bin and it supposedly got sorted later. Tim's thing was "if you're in doubt, throw it in the recycling bin. They will throw it away if it's garbage."

Once, when I first started dating a guy, I went with him to a recycling place in Brooklyn where they were sorting brown, green and clear glass. They had a separate bag for green bottle tops and blue ones. There were bags for different kinds of paper. It was nuts.

Back on planet Earth - i.e. Amsterdam - we have paper (papier), glass (glas) and the rest (just like on Gilligan's Island). I go a little nutso on the paper. Fred would love to throw out lots of stuff that I dig out of the trash and put in the paper pile. And bottles too. I say if it's glass, it's glass. It doesn't have to be a wine bottle. Olives come in a glass jar, too, Fred. Even broken wine glasses are glass, aren't they?

The pity is that aluminum cans go in the Rest bin. And the pity is that we create so much trash. I saw a thing on tv about saving organic waste. I would totally do that if they had that here. Fred would hate it. I'd still do it. It wouldn't be the first thing I do that he hates.
Posted by Andy Baker at 3:32 PM

here they tell us specifically that broken drinking glasses are not recyclable, but they don't say why not.

I heard recently about a pilot study in Seattle where they have found that it is actually more efficient and more gets diverted into the recycling stream if everything goes into a common bin and it's sorted out at a center later. The reason is that things invariably get mis-sorted, necessitating a sorting center anyway, and people are more likely to recycle if they don't have to overthink it.

Here the council supply each house a blue dustbin for paper, a brown for 'garden' waste and a black one for everything else. We make the trek 250 yds to the recycle bank for glass & plastics(most people dont bother). Here it sometimes seems too much for people to sort between trash and the paper on their own doorstep..it enrages me somewhat!!!

I recently came across your blog and have been reading along. I thought I would leave my first comment. I don't know what to say except that I have enjoyed reading. Nice blog. I will keep visiting this blog very often.