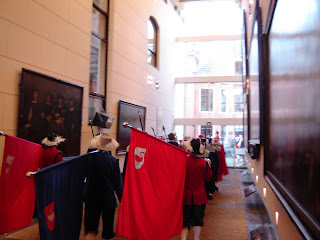 While I was waiting for something to begin this morning after church, I heard some music and a parade going down the street. I ran to catch up, but I never got to a place where it was a really good shot. So I gave up. I think this had something to do with Sinterklaas, but apparently he wasn't with them. It was one of those things that I like about Amsterdam. People in costumes walking down the street. So quaint.

After I got back to where I had run from, I gave a knitting class. The woman who runs the 20s and 30s group asked me if I could do a knitting class. I've never taught a group - and my latest attempt at teaching a woman I know failed so miserably that she swore off all craft projects - but I've taught a lot of groups in my time, so I thought I would be okay. It's two stitches. What could go wrong?

I asked two new friends, Malia and Daniel, to come along and be of assistance. People need to be watched and they need their mistakes fixed. And some need hand holding and petting. There were five students to three teachers - a wonderful student-teacher ratio. In that last paragraph, I tried to make it sound like something horrible happened (to build intrigue) but nothing happened. Everyone got a little swatch started and some even cast off. It was a gezellig little afternoon.

The eagerness of Malia and Daniel to help out like that really does illustrate to me - again - the generosity of knitters. The whole teaching thing went well. I would suggest to anyone that they try teaching someone something, like knitting. I really enjoy it.
Posted by Andy Baker at 5:15 PM

Isn't it kind of early for Sinterklaas? I thought he didn't show up until around 5 Dec.

It was a pleasure, thanks for inviting me!

Sinterklaas arrived in the country last week some time (by steamboat, from Spain), and was formally welcomed to the capital by the mayor and assembled dignitaries (and 4 tonnes of pepernoten) on Sunday afternoon.

Between now and 6 December, he tours round the country accompanied by the Zwarte Pieten. Children can put out their shoes in the evening and, if they've been good, will find a present from Sinterklaas in the morning.

On the eve of Sinterklaas Day itself (ie, the evening of 5 December), the children get their main presents, again, only if they've been good.

Sorry Andy, 25 days and Im struggling with NaBloPoMo so you have been tagged for a particularly pointless meme!

Maybe after you're done with knitting you might want to try something that could benefit you financially :) drop by my website and watch my video if you can. It's supposed to make you money.