A Flower and a Book 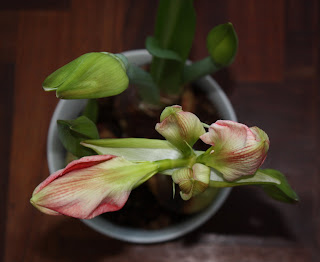 Our neighbor, Pita, is a real peach. We're the only two apartments on the our floor and we couldn't have asked for a better...floor mate. She's somewhere in her mid-thirties and has a nice quiet, polite quality that it good in a neighbor. She travels a lot for work, so she's gone a lot, which is sort of a pity because I wouldn't mind seeing her more. But she's usually available to feed the fish when we go away for an extended period. She even cleaned the fish, which Fred thought was like asking her to clean the toilet. Okay, it sort of is like that, but it's fish poop, so it wasn't unreasonable in my book.

Pita showed up for a party we had with a big package wrapped in a lot of paper. It turned out to be a bowl with three amaryllis bulbs in it. The voice in my head said, "Thank God it's something I want. What a relief!" And my mouth said, "Amaryllis bulbs! I love stuff like this!" I really did like it. She said that the woman who sold them to her swore they would grow, but if you've seen amaryllis bulbs, you know that when they're dormant, they are asleep. They're just like large onions. Knock all you want. No one is home.

Fred set the bowl in a chair and watered it weekly as he was instructed. (Do you see how Fred moves most of the stuff around in the apartment?) And we waited. After a while, I thought, Well, it was sweet of her, any way. It's not her fault that they're duds. Then they started growing and now they're in that "tween" stage. 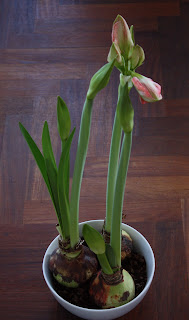 It was a really lovely gift. It's one for the books. We're not really good friends, but there's a genuine affection between her and us, so it was totally appropriate. It was packaged nicely and it's one that will be with us for a bit. Fred might fight me on it, but I'm going to salvage the bulbs at the end of their growing cycle. You can do that, you know. I'll just Google to find out how. 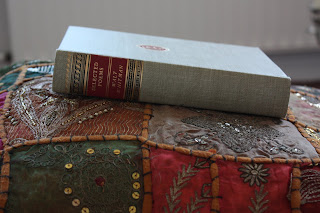 When Patty arrived, she brought a gift from her nurse practitioner, Judy. Judy and I have a special relationship, although we've only met once and that was many years ago. The first is that we're the godparents of (Bill and) Patty's daughter. Of course, Judy, being a local, is a much more active participant in Grace's "spiritual development." Judy sent a volume of poetry by Walt Whitman. The causal observer may not get the connection. Do you?

Judy, Whitman and I are all friends of Dorothy. We all play for the other team. We all have something in common with a three-dollar bill. Walt Whitman was supposedly gay, but apparently that's debatable. However, I got Judy's reference. It's interesting to read about how "biographers continue to debate his sexuality." The gay community - at least the one in NYC - has claimed him for years. We claim a lot of people on suspicion. Years ago I saw wheat pasted posters claiming John Travolta, Olivia Newton-John and Jodi Foster (among others) were all gay. John and Olivia are probably not, but Jodi sets my gaydar off like few other people do.

Years ago, I was walking in a park in Brooklyn and there was a whole set of stones commemorating famous people from Brooklyn. (Whitman is not technically from Brooklyn, but apparently spent some time there.) I think that was when my boyfriend, Billy, told me that Whitman had been gay.

The volume of poetry from Judy was a well-thought-out gift. It was completely appropriate given our connection and how well we know each other. Plus, I really like old books. Fred may live his life never touching it (it's not completely new), but I like it and I like seeing it. It's totally me, and it reminds me of Judy who I once offended horribly. (I still feel a little bad about that.)

Gift giving is really interesting. I had a friend years ago who would always give me what she thought I needed. It was rarely what I wanted, and some times it had nothing to do with me. It was all about her and what she would have liked.

Thanks, Judy and Pita (neither of whom probably read this). They were great gifts.

Note: all these photos were done by Fred. He's a very artsy guy with the camera - and he did actually end up touching the book, so that was a bit of an overstatement. He just refuses to read used books.
Posted by Andy Baker at 11:10 AM

It's totally possible to grow Amaryllis bulbs from year to year. When the flowers are done, put them in the sunniest place you have. Then in the fall, stop watering them and let the foliage die back (you can put them on their side in a cool dark place to help with this). Then start watering them again during the winter. You don't need to repot them. They rather like having their roots crowded. And you may need to prop them up. They get a bit top-heavy.

That is really beautiful! What a great idea. Tell Fred he has done a lovely job with the pictures. Remember those tulip bulbs I brought back from my trip in September? I still haven't planted them. I was going to do that today, in the little ceramic clogs. There is one for each of the kids. I just hope they grow!

That was very very sweet. And I absolutely love an amaryllis. I used to have a few every Christmas, but I haven't had one in the past year or two. I have never successfully gotten one to re-bloom, but I haven't tried that hard. Judy would love this post...