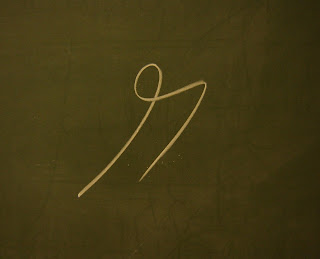 When I started teaching school a couple of years ago, I noticed students and teachers making this little mark when checking answers. To me, it looked like an elaborate X, like something was wrong. But it meant that it was right. So it was confusing for a bit before I asked about it. I just assumed they would use a simple little tic, or check mark, next to the right answers. 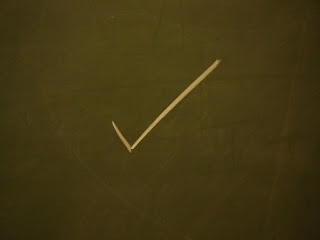 And when I put a tic, students would ask what it meant. It was a clash of cultures.

It seemed so odd to me that such an elaborate mark could come to mean okay when a simple check mark would do. (I think the X is pretty much universal.) I'm curious about where it came from and how it came to be. I'm not even sure it's really called a krulletje, or if I've spelled it right. I've looked on the Internet and asked people about it. Some people don't even know what to call it and no one I've asked knows the origin. Anyone have any information?

It took me a while to be able to draw it correctly and it probably still has the look of a krulletje done by someone who learned it late in life - like my spoken Dutch sounds.

Oddly, I've taken to using it. Sort of that "If you can't beat 'em, join 'em" thing. I'll just adjust - as I have with so many things.

Today at church, a woman said, "The longer I'm here, the less English I feel." She's been here a lot longer than I have and lives a bit further afield among the natives.

I said, "Really? The longer I'm here, the more American I feel" - or really, just non-European. I can see the differences all the time. I'm so often the only American in the room. I know I'm the only American a lot of my students have ever met or spent any time with. I am an "every day ambassador," as my friend, Pam, once told me. I hope I'm doing my countrymen proud.

I don't know what it's called, but that is a delete mark in proofreading: http://www.merriam-webster.com/mw/table/proofrea.htm

I would assume it meant something was wrong.

How about the way they write 8s? That's a curious way to go about it. I would agree, I also feel less American the longer I'm here -- or less at home in America, if that's the same thing.

Having moved from Holland over 13 years ago now, I don't quite feel Dutch when I'm back in Holland (even though in Holland not many people would be able to tell that I've been away for such a long time), and when I'm in Britain, I feel fiercely Dutch. It does help that I work in a Dutch department of a translation agency where we speak Dutch all the time, and that I speak Dutch to my children. Sometimes I feel I have a foot in both countries, sometimes like I fall into the channel in between the two.

G for Goed? I don't know if Dutchies make their capital G's like that, though.

Yeah, this confused me too. My son would bring home his papers with these all over it and I was sure they meant that the answers were wrong!