Out the Back, Jack 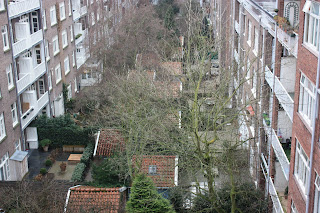 I'm crazy about the view out the back of our apartment. We have a balcony, which is a nice little luxury. Not everyone in Amsterdam has a balcony, but a lot of people do. It's on my "must have" list for our next apartment.

Photos like this remind me of Rear Window. Before I lived in NYC, I imagined that the court yards of buildings had views James Stewart has in that movie. It's not exactly like that. I dated a guy for a long time who had a view like Rear Window. You could tell where one apartment ended and another began, but you couldn't see anything inside. People had drapes and plants. They're too far away and the angle is all wrong.

I like the balconies on that backs of these apartments. A couple of years ago, I was out there every morning listening to a podcast and knitting. I think it was in August. It was nice and peaceful and cool out back while the sun shined in the front windows of the apartment.

The little gardens down there are nice. I'd like to have outside space like that, but they don't get any sun except when the sun is really high. I don't like to sit in the sun, but I know it's important to have it in your garden once in a while.

I'm such a city dweller. I really like living in an apartment, stacked up and living side by side on the fifth floor of a building. There's something sort of cozy about it that I like. I think I'd feel sort of isolated alone in a house. I've been completely reprogrammed.
Posted by Andy Baker at 6:38 PM

That just feeds my claustrophobia. Besides, the biggest thing I missed in all the years I lived in cities was not being able to see the stars at night.

Ive lived in a little village, in a city and Im now a townie. Though I loved city life at the time..I prefer to be a 'house' dweller. I miss the country but not being a driver it was too isolated alas

I've nominated you for an award, no idea how you feel about awards but you can find it on my blog http://stitchoneknittoo.blogspot.com/