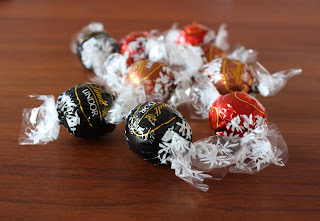 As I wrote the other day, I had coffee (and then a meal and then sake) with an ex-student of mine, Marco. I was just expecting coffee - and a 'gift' that he said he had ordered - and then to be on my way. When he said he had a gift that he had ordered, I thought, Oh no. Please let it be good. (I usually say that with gifts, don't I? Look back at me talking about our wedding gifts.) I thought he might have ordered yarn. It was a stretch, knowing him, but I couldn't think of what else he would have to order.

First off, he brought out some chocolate. Chocolate is good for all occasions - and this is really good chocolate. It's Lindt. Then he brought out the pièce de résistance (pardon my French), which was the Special 30th Anniversary Edition of School House Rock! (The exclamation mark is in the title, but I was really excited.) It's got tons of extras. And besides Grammar Rock, it's got Science Rock and America Rock. (And that's not all!) It's wonderful. Fred and I watched several of them the night I brought it home. He was quite engaged. I'll enjoy this for years to come. 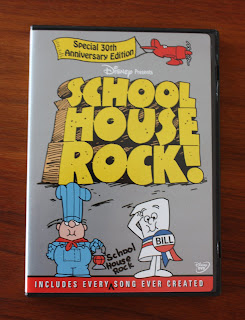 That's the thing about Marco. I suggested School House Rock! to explain parts of speech and and he downloaded several to his iPhone. He knew I like it and he understood the place that it has in my heart. And he remembered it when shopping for a gift - which most of my students don't usually bother with, by the way. He also had the wherewithal to Google me and found the bloge. I will say that he didn't give the knitting the respect it's due, but I forgave him.

Anyway, after we had coffee, we walked around the Center, in the Red Light District, since we were planning on eating Asian food and (what passes for) Chinatown is right there. He showed me this: 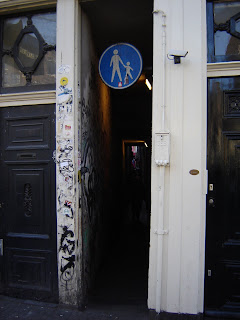 I may have seen it before, but if I have, I can't remember it. He said it was the kleinste something...steeg? The smallest or narrowest alleyway in Amsterdam. It looks a little foreboding in this shot, but it's not that bad. It leads to some windows (the ones with the red lights). As I snapped a couple of photos of the opening, the guys coming out of the alley didn't look thrilled. 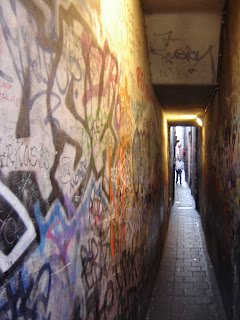 The alley is much less scary than it looks and quickly empties out into a wider street where the women in the windows are so friendly. They all smile and wink - but they don't wear much clothing.

The afternoon was a nice surprise. I really did expect just coffee. Instead, we walked, I snapped some pictures, we talked a lot and we ate dinner - going Dutch. How appropriate is that?

I've been down that little skinny walkway..as a tourist, not a touter of trade. lol