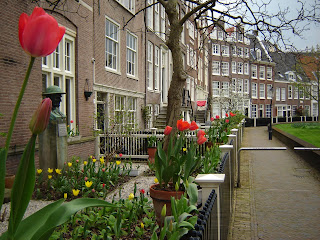 I spent the majority of the day on the computer organizing and trying to get rid of stuff - digital stuff. I managed to make some headway.

It was an amazingly beautiful day today. Of course I had the day off work, but I stayed indoors for the majority of it. However, I stepped outside a bit - on the balcony - and then I had a coffee date with a friend/colleague, which was nice. We sat outside on the street. I like the feeling of being out on the street at a small table with cars whizzing by. It's the kind of thing there wasn't enough of in NYC. There's a lot of it here, and it's mostly bikes that whiz by. 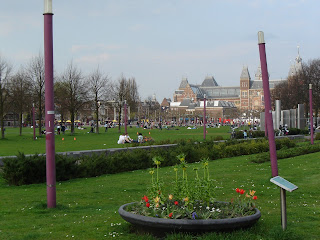 I had to be at church at 6:00 PM for the rehearsal for the music we sang in the service tonight. I decided to carry the camera along because I keep seeing things that would have been nice to have a picture of - if I'd have remembered the camera. On the way to church, I passed Museumplein. That's the Rijksmuseum in the background. Lots of people outside enjoying the weather. 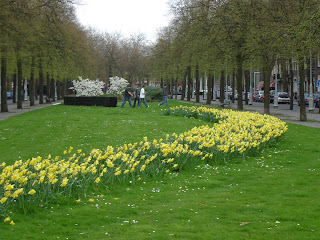 These flowers are a little damaged from the wind, but there hasn't been a really great day when the sun was out, but I had free time to go out. This is Apollolaan, which is a nice little thing to pass on the way from here to there. 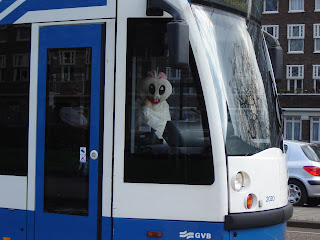 This was an interesting sight. I was glad I had the camera in my pocket. It hardly seems safe to drive a tram wearing a bunny suit, but I guess someone approved it - or they didn't know. 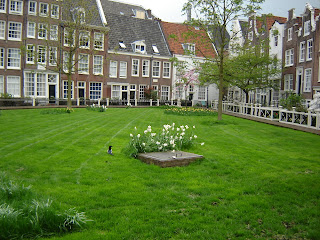 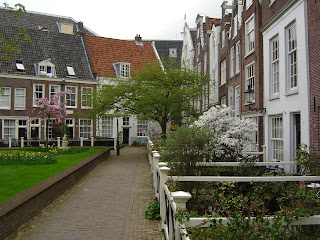 These last two are shots of the Begijnhof where my church is. It's a very sweet little out-of-the-way place. It's difficult to capture it in pictures. It was such a pretty day. Tourists are beginning to crowd the city.

My friend, Dorothy, said, "There are a lot of foreigners. It is terrible." She said that in English and used the word foreigners. I said, "I'm a foreigner." She said, "No, you live here." I know what she's talking about. Disparaging tourists is a favorite pass time of people who live in tourist cities.
Posted by Andy Baker at 9:39 PM