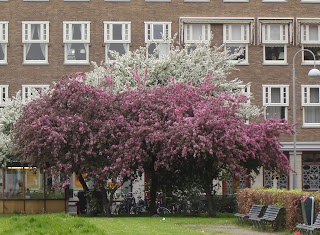 The only bad thing about this time of year when all the trees are blooming and the city is filled with color is that it only lasts a few weeks. I don't know why it has hit me like it has this year, but I'm completely obsessed with the blossoms on all the trees. These are two of my favorites - above. It's not the best picture because it was late in the day. And they're a little past their prime, but I love seeing them. They look great from any angle. I'd go up and take one during the day, but there's a flower seller right under the tree and I'm a self-conscious photographer.

All these flowers remind me of when I was living in Brooklyn one spring in an old neighborhood, being the house keeper to a gay couple (that's a whole novel right there). There were a lot of rhododendron bushes in the neighborhood. I think they were rhododendrons. But they were absolutely beautiful that spring with all the pinks and reds and whites covering these well-manicured bushes.

I'm sorry that the petals are all falling off the trees now. I don't remember this from my years in NYC or growing up in Texas. It's something I associate with Amsterdam. Maybe I'm wrong. But my focus was not on flowering trees until I got here. 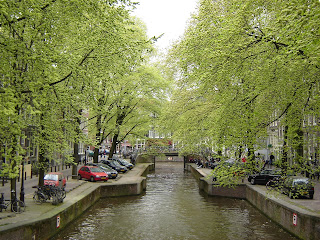 New growth on all of the trees is nice too. Sometimes I stand on a bridge and look out like this and I'm amazed that this is where I live. It's so beautiful in the Center - and there are plenty of tourists, if you like that sort of thing. We were amazed at the number of tourists walking around today. 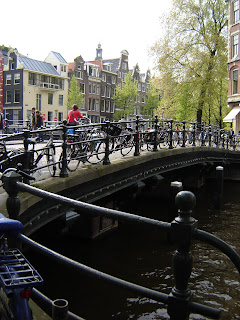 Here's another very Amsterdam photo. Fred took both of these today. We keep looking for white asparagus because it's supposed to be in season. Aller Hande has some nice recipes Fred wants to try. Tonight, we had to go with our alternate: bloemkool - cauliflower - in a curry. We bought the box set of The Wire so we can have something to get addicted to and there won't have to be discussion about what to watch in the evenings. As Fred was pondering it, I said, "Terry Gross loves it - and she's smart." I'm not sure if that helped, but if I had said that another favorite had said they liked it, it would have been back on the shelf and we'd been out the door. Fred doesn't like them.
Posted by Andy Baker at 8:06 PM