The Day I Became Dutch 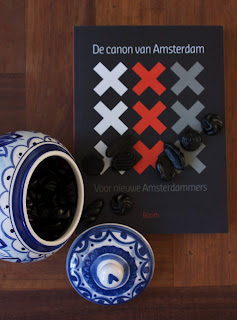 This afternoon, while were were walking up to the door of the hall where the nationality ceremony was to be held, I turned to Fred and said, "I forgot my camera." It's a pity, but then during the ceremony, I kept looking around saying to myself, "There's really not that much to take a picture of." I found it soothing - don't spoil it for me.

Similarly, Fred and I were about to lift on on our helicopter ride around the Grand Canyon a few years ago and he looked up and told me that the batteries in the camera were dead. I mouthed, "Where are the spare batteries?" He mouthed, "Spare batteries?" I felt my stomach hitting the floor (of the canyon), but I decided to just sit back and enjoy the ride. Does the world really need another set of Grand Canyon pictures? That's how one sooths himself in situations like that.

So this is the picture you get. It's the gift all us new Nederlanders got. The title is just The Canon of Amsterdam: For New Amsterdamers. It's a history of Amsterdam since we are not just Dutch citizens now, but citizens of Amsterdam as well. The blue and white pot and the drop is from Ada and Bart. It's from a store called Blond. I've been in there, but it's one of those stores that looks like it's geared towards young pre-teen girls. The pot was a good find.

The nationality ceremony was held in a small hall in the Muziektheater - the Boekmanzaal. There was a piano playing when we arrived and everyone had to sign in at the table. Lots of red chairs in rows. You could bring some friends. I brought Fred; his sister, Ada; and Ada's husband, Bart. We had a cup of coffee and sat and waited for it to start. It was scheduled to start at 3:15 in the afternoon. The invitation said that the doors will open at 3:00 and close promptly at 3:15. They were still open at 3:20, which I found slightly disappointing.

The crowd was very...ethnically diverse. In fact, at the end of the ceremony, the MC read a list of countries represented. Lots of Africa, Asia, as well as the usual suspects: Turkey and Morocco, and even Canada, and the US. There were probably some folks from South America as well. If you do the math, it's sort of logical. Anybody from an EU country gets a pass on the whole citizenship thing, so it's gonna be everybody else. It was quite a mix. A huge list of countries and probably over fifty people getting their citizenship in Amsterdam today. The whole thing lasted an hour and then Bob's-your-uncle: it was over. (Apprapo of nothing, I keep saying Bob's-your-uncle lately.)

The speaker was Godfried Lambriex. He's a politician, an alderman, a city council person from the Baarsjes. He gave a speech sort of bent over the microphone. He just read it really fast. It was one of those pat speeches that anyone could give, the kind of stuff you'd expect to hear at a citizenship ceremony. "People come to the Netherlands for all sorts of reasons...you're one of us now...rights and responsibilities...yada yada" Even Ada said that he talked too fast. He was also completely uninspiring. Well, he did mention that everyone's little idiosyncrasies and differences are okay in the Netherlands. I'll take that to the bank.

After Mr. Lambriex's speech, a blond woman stood up there and read everyone's name - one at a time. Upon hearing his or her name, the person stood up and walked to the front so that Mr. Lambriex could give you the official paper and the gift. I have to say that I think the woman reading the names did a phenomenal job. Some of the names were just crazy. Names from many different countries and she just zipped right through them. "Deheer Baker" was one of the easier names, obviously. There were lots of women, as one might suspect. A fair number of men. A handful of children. Those African girls were cheering and taking pictures like crazy.

And then, as they say, Bob's your uncle. There were drinks and hors d'oeuvres. Most of the folks beat a path out of there. We stood and had a glass of wine and then went for coffee. (You have to keep those stimulants and depressants in balance.)

I was sort of numb. I don't get nervous before things like that: speeches, singing, etc. It's after that I feel it. The whole ceremony and being the center of attention (even of the three I was with) just sort of took it out of me. I had choir rehearsal in the evening and I had to come home and take a nap. I used to go grocery shopping and feel like that. My brain was so full.

So now I have dual nationality. And I'm married. When I was 43...it was a very big year..It was a very big year legal things...like weddings and stuff. I have three more weeks of 43. Let's see what I can do with that.
Posted by Andy Baker at 9:31 PM

Now that you're Dutch shouldn't you be saying, "klaar is Kees"?

I think if Dutch citizenship required eating those licorice drops, I'd have to pass. I was able to manage one once without trouble, but halfway through the second one, I knew my throat would never let it go down. I think the salty/sweet combination would work okay with just about any flavor except anise, which I've never been a big fan of to begin with.

Fred likes the double salt, which I think feels like eating acid. I think you probably had a salty one, Mel. I'm a fan of the sweet. And for the record, citizenship is not contingent on eating drop.

Congratulations! (or better: Gefeliciteerd or even more Dutch: gefeliciflapstaart but that's not very appropriate for a formal occasion such as this!)

When I got my citizenship four+ years ago here, I filled out some paperwork, paid a fee, and got my passport in the mail. A few years later, there was an article in the Dutch newspaper stating that in the United States they actually have a ceremony for people who become citizens, and that the Dutch ought to follow suit. Of course, I knew this.... The Dutch ceremony is a recent import. When I got my passport here, it took less than five minutes to fill out the paperwork, and that was that.... Oh, I did get a letter from the Queen telling me I'd been accepted.

I came across your website in my search for relevant websites about Amsterdam.
I would like to introduce us as an online hotel booking engine: easytobook.com

I wanted to ask if we could place some form of advertisement on your website?
For this we will pay you a fee.

Looking forward to your thoughts about this,


try this one also