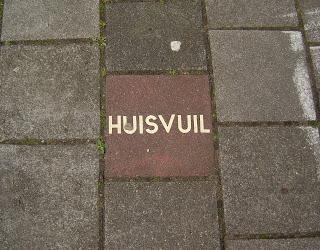 When I first saw this tile after moving here, I didn't know what it meant. I thought that it was, perhaps, a marker for something that was underneath that tile: a valve, a pipe. I think I was able, at that point, to pick the words apart and see that it was huis (house) plus something. I knew the other part (vuil) was pronounced foul, so I thought, House-foul...was it poo? I imagined a valve there that led to the sewer system.

I was wrong. That's not it. It's just a tile telling people where to pile their trash on trash day. Huisvuil means literally 'household rubbish.' Here's a snap to give it some perspective. 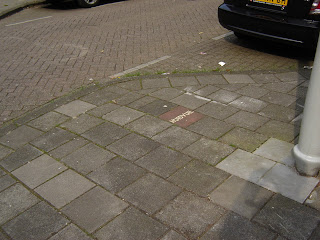 I know it seems to ridiculous and mundane after you've been around it for years - or grown up with it - but seeing little things like that used to keep me distracted half ways down the block. There's just nothing like it in my experience. In suburban America, you put the garbage by the curb in big trash cans or bags. In NYC, I used to put my garbage in the cans in front of the building and the super would organize everything for the trash pick up. There were no tiles necessary. So I had no clue.

There's a woman at church who collects plastic for recycling because apparently in Diemen - where she lives - they collect plastic for recycling. I would love to recycle plastic. It would drive Fred crazy to have another bag around - which, of course, if part of the appeal. As it is, we just do paper and glass, both of which I am very mindful of. There was a super-crazy and specific recycling project in Brooklyn many years ago that someone once took me by - on our way to something else. There was a bag for green bottle tops (those screw on kind) vs. blue bottle tops. Part of me loves that.

In Amsterdam, there are special days to put out big stuff like furniture or...other stuff that's not normal garbage. There is the occasional toxic waste pickup in case you have batteries or ink cartridges. The Dutch or pretty consciencious about trash, which is probably smart.

Years ago, I knew a woman who worked in "Solid Waste Management." My first thought when I read that? Poo. She said everyone thought that. It was all about what to do with all that garbage people produce. Garbage is one of those subjects that makes my mind reel. There's so much of it!

The plastic recycling thing is supposed to be national within a couple of years. Amsterdam is resisting it because they burn all the rubbish in some kind of high-tech incinerator and use the heat to generate electricity. Since plastic is basically oil, it contributes quite a lot of the energy to the process.

The city council say it's more environmentally friendly to extract the energy from the plastic than to recycle it. I don't know who to believe.