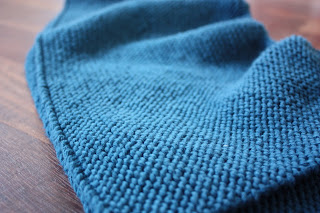 My latest obsession - and it is a bit of an obsession - is this Tomten jacket that I'm knitting. It's just constant knitting without a single purl in the mix - so far. As I write this, I have knit about nine inches, which is 22.5 cm. I think I have another six inches (15 cm) to go before anything really happens. It's just constant knitting, as you can see in the pictures. 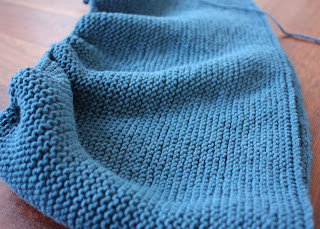 I just did some calculations and I believe I've knit about 19,600 stitches so far. It feels really nice. I'm hoping it will be about the fit and weight of a hooded sweatshirt. The color here is not the actual color of the yarn. The yarn is a little darker.

In other news, things are going well here. It's raining and I've had a busy day doing that thing that I do. Lots of things in the mix. I just downloaded a trial version of a program called Scrivener, which I heard about through a woman in my writing group. It's supposed to help in organizing what your working on.

Last night I went to a rather casual meeting of other writers in Amsterdam (who happen to write in English). It was interesting. When I moved here, it took me a while to find a writing group and now there are three groups going. And last night I realized that I need to just focus on something. So that's my goal this year. We'll see how that goes.
Posted by Andy Baker at 5:08 PM

that tomten jacket is looking great so far! sometimes the only thing that really seems to work is lots and lots of garter stitch. : )

I haven't heard of Scrivner before... I'm going to go check it out- thanks!

"Literature and Latte"? - Seems like this is what I need right! Thanks for the link! Tomten loks great. The Cavern Cardi I'm making is mx first top-down seamless knit and I'm also really fascinated by how this works (and it really does so far). It's kind of chilly today, windy, cold - so keep on knitting your fall-jacket!! Doris (sorry for still being your anonymous commenter, will change this soon)

Wow you have really cracked on with your Tomten jacket. I checked out the pattern on Jared Flood's site and I love it (if only I could adapt it to a 32" chest..hmm).
My curiosity also made me look at Scriver..I could have a autobiography in me waiting to burst out.