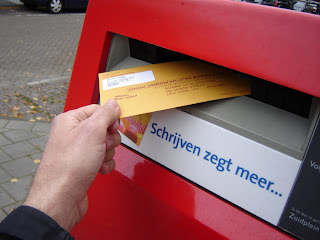 It's amazing to me how many people ask me "Can you still vote?" Or they say "Oh that's right. You can't vote...can you?" It's one of those things I feel like I've always known. My mother voted absentee a lot. I remember her doing it to avoid the lines on election day. This year she voted early - and for McPalin. Anyway, I knew when I moved here that I'd need to register for an absentee ballot.

There's also a big drive to get out the expat vote through organizations like VotefromAbroad.com and Democrats Abroad. Last time around (Bush-Kerry), Democrats Abroad was saying that there are eight million Americans that live outside the US. Someone in the know told me that that number was plucked from the air. He said that since a voter drive like they were doing had never been done before, there was no way to tell, so they guessed and acted confident. It's less that eight million, but it's a lot of people - and we're not all Democratic. There's a very nice woman at my church who is a staunch Republican. She's had a head trauma and she thinks Lincoln is still in the White House, but she's nice.

Voting from abroad is pretty easy. The most important thing to do is register. I think registration has been closed in most states, so if you're just getting this memo, you're sort of out of luck. I have a friend who asked about registering a few weeks ago. I said, "You're not registered?" I was amazed. I asked the question like I would ask, "You can't read?" It's sort of late in the game to be asking about registering to vote. Maybe she can just send flowers instead - or a nice muffin basket.

I registered when I got here (almost five years ago) and the New York State Board of Elections sent me something several months ago to ask whether or not I was still at this address. I returned it and they sent back a card to communicate that they'd received my answer. Then about a week ago, I got an envelope with more envelopes and a couple of papers. Here's the envelopes. They nest. 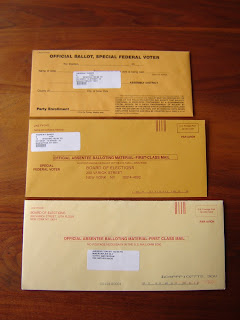 Also included in the package is a ballot with all of the choices. 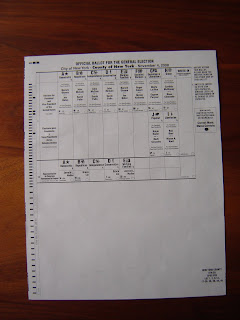 Here's a close up. 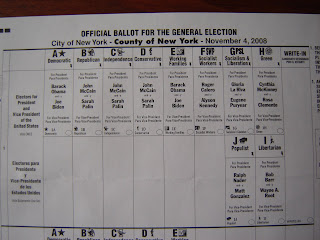 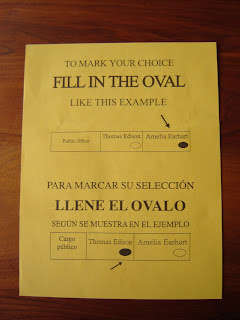 Amazingly, the New York Board of Elections, sends the instructions every year in English and Spanish as well as two Asian languages - Chinese and Korean, I believe. Yes, if you need to read instructions on how to fill in a black dot, and you need those instructions in Chinese, you can still vote. 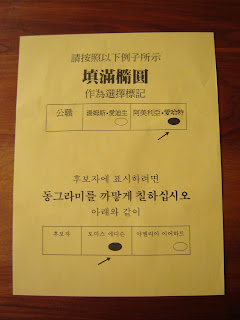 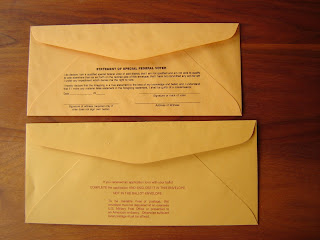 I'm half-way kidding. They're not unfriendly, but it's a bit of a process to get into the consulate. It's not really worth saving a euro. Don't forget to vote. Vote early if you can!
Posted by Andy Baker at 8:01 AM

Yes, gentle reader, you are correct. It is all in the punctuation. I chose something different. But thanks for pointing that out.

How can it be hard for you to get to the Consulate - it's about 10 minutes from your front door!

It's not difficult to get TO the consulate. It's a pain to get IN. You try it, Scottish man. It's even a pain for Americans - not a pleasant experience.

And I no. It was NOT McCain.

Thanks for the clear and interesting post. Who are the other candidates on your stembiljet? Do people vote for them?

I voted. Pat and I are registered in two adjacent counties in California and we get wildly different voter materials.