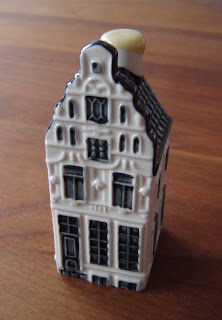 Luchtvaartmaatschappij is Dutch for airline company. As in Royal Dutch Airways - or KLM. One of the things I like best about the Dutch language is how they smash a couple of words together to make another longer word. (German has it as well, of course.) Lucht means air. Luchtvaart means aviation. And maatschappij means company. Another good word is gemoedsgesteldheid. It means state of mind or disposition. Learning how to pick words apart to figure out what they mean is an interesting process. A good knowledge of shorter words helps.

The picture above is of the little house I got when Fred and I flew back from Bangkok at the end of August. You only get one if you're sitting in business class. Fred had gotten four others when he flew for work. So now we have six. They're filled with brandy, but people don't usually drink it. They're about three inches tall.

All of the houses are numbered. This is number 10. There was a couple on our flight who has so many that they have to pick through them to see which ones they don't have yet. (They were very at home in business class. It was a little annoying.) Fred and I were just lucky that he had enough frequent flier points and that they had enough room for us.

Everything in business class delighted me. The food was better, the seats were bigger, and when I said I wanted a glass of red wine, the stewardess said, "I have a lovely new wine you might like to try." And it came in a glass!

We also got a little case that had socks and an eye cover to block out the light and some toiletries. And then when I just couldn't knit any more, the seat went almost all of the way back. Not quite flat, but I've tried to sleep in economy enough times that I was fine with it.

And then before we landed, we each got one of those little houses. It's really just too much. But flying business class is expensive, so I guess that's what you pay for.
Posted by Andy Baker at 5:35 PM

I have 2 of these little houses but alas have never flown business class. They were a gift from my uncle when he spied my little collection of Dutch tourist tack! One of the bottles is minus its brandy though he assures me he did not drink it. He tells me they do not serve alcohol on some of the Kuwait flights..if only they'ed do that in the UK!!!!