One or the Other 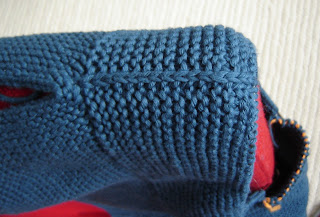 I shudder to think how longs it's been since I've posted. It think it'll be two weeks tomorrow. I've been paying all my attention to work (preparing lessons, giving lessons and recovering from lessons) knitting (working on my endless sweater) and listening to everything I can find regarding the American presidential race. My contact with other people has been limited mostly to my students and Fred, with choir thrown in every Tuesday evening. So I feel like my life has gotten very focused, which I'm not crazy about. It'll change after the election and when the school year starts to feel like it's flowing.

So I have two things I could write about right now: politics or knitting. I'm going with knitting. But I do plan to get in at least one more rant before the election, so stay tuned for that.

I'm currently working on the Tomten sweater, originally designed by Elizabeth Zimmerman with modifications made by Jared Flood. I'm using some yarn given to me by a friend. It's blue and it's cotton and I've got a lot of it. The sweater is all garter stitch. I made a giant piece of fabric (41" x 15" inches - pits to hips) before starting the top part. It was pretty amazing. Then I did three vertical rectangles and then I connected them.

Because I am someone who has been perfecting his knitting skills by doing gloves, socks, scarves and hats, this seems like it's lasting forever. I started on 3 September, so I've been working on this for a while. I'm enjoying the process. At every crossroad, I read EZ and then I read JF to determine how I'll proceed. I like JF's reasoning about why he made certain modifications. One of them is the slip stitch down the sleeve, which sort of looks like a seam. He did them on the body, too, which might have helped spice that up, but I read that part too late.

Anyway, I started on the sleeve. It was a little fiddly, but it worked. You do the whole thing back and forth and at the end of every round, you pick up one of the stitches that was left on a string. I did a swatch and did Ktog at the end of the round. I didn't like it very well. So I did SSK and it looked much better. I should probably have alternated, but I did all SSKs. I'm not worried about it. I like the abrupt change in the fabric, the 90 degree switch in the way the lines are going. It's amazingly clean looking. 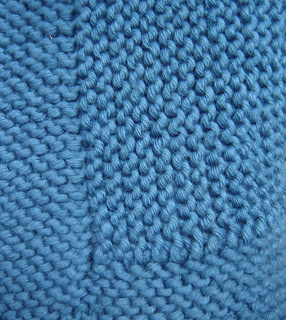 I'm keeping copious notes on how I'm doing this sleeve so that I can do the other one just like it - or as much like it as possible.

The downside of being very focused on this project (monogamous, some say) is that I am not working on anything else. I should probably take a break and finish a couple of things that have more of a deadline. And it's getting really heavy. I'm glad it's cold out.
Posted by Andy Baker at 7:25 PM