P is for Prei 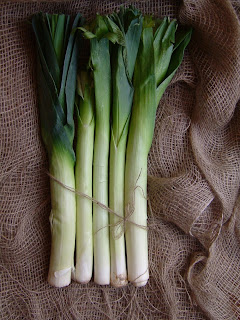 I have to start this post by saying that I did not take this photo. I got it off a website. But it's nice, isn't it?

Prei is the Dutch word for leeks. Before moving here, I had only eaten leeks as an ingredient in soup, like an exotic onion. It's almost like an exotic vegetable here - as opposed to the onion relative that it actually is. We have it as a side dish here and it's in a lot of vegetable mixes.

We had a dish the other night that featured prei and it was so good - very casserole, very shepard's pie. It was in the AllerHande magazine. It was a layer of sauteed prei and then some pieces of pork that had been cooked in a pan for about a half hour and then on top of the whole mess was mashed potatoes with nutmeg. You throw it into the oven for about twenty minutes and it's really good. It was good for two nights.

I love a one dish meal. And AllerHande is good for a lot of variations on a theme. One of them has a fennel and onion mix on the bottom, white fish in the middle and slices of boiled potatoes. It's really good - and a crowd pleaser. We've served both of these to dinner guests.

Jamie Oliver is another favorite recipe source. I ate enough Chinese take out in NYC to feed a small village. Now I cook.
Posted by Andy Baker at 3:31 PM