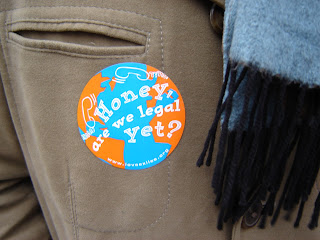 This afternoon, Fred and I went to a rally on Marriage Equality. The rally was to bring awareness to the issue and to protest the passage of the ballot initiatives in three US states banning same sex marriage. In case you didn't hear (and I know someone didn't), California, Arizona and Florida passed initiatives to define "marriage" as one man, one woman. Apparently, there were rallies like this all over the world today - attended by gay people and the people who love them. 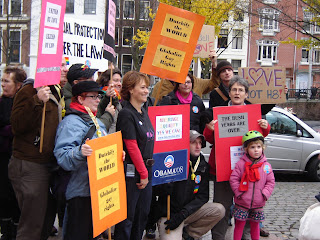 Most of the rallies probably had a few more than the Amsterdam rally did. Few in number, but strong in spirit, as they say. We met at the Homomonument (where else?) and held up signs (some people - not Fred and me) and tourists walked around us and took pictures (of the gay people in Holland). I'd heard there was going to be a march through the streets. Fred and I would totally have ditched them if that had happened. Instead, the group went to a cafe for coffee and conversation afterward.

I haven't written anything about those stupid ballot measures. Shame on anyone who voted for that. I've been here now almost five years and it feels strange to me that gay people can't get married in the US. I mean, I understand it. I lived there my whole life up to just recently. But I've been living in this society long enough that it feels normal - and it'd completely normal and life continues. To take away the right to get married - as is the case in California - seems like a really sloppy thing to do policy-wise. Even if they let those 16,000 couples that got married when it was legal stay married, it means they have a right and other people don't. It just seems really sticky. It seems so sticky to me that I predict it will be overturned.

It was nice to sit around the table after the rally. Martha (in the middle of the second photo) organized the whole thing. Her pet project is Marriage Equality and she is one of the founders of Love Exiles. The website doesn't look that gay, but the content is all about same sex relationships and how people have to relocate to strange countries (Holland) when the fall in love with a person from another country.

That used to be on my list of things that a prospective boyfriend had to have: American citizenship or a green card. Fred has neither and made the cut.

That's why I like to have a list. So at least I know what rules or goals I'm straying from.
Posted by Andy Baker at 5:31 PM

I live in Florida and became active in the Obama campaign this year, along with trying to rally against Amendment 2. I was so thoroughly disappointed and embarrassed by my state when it passed.

Wouldn't it be better to have demonstrated at the US Consulate?

I need to say you need some H20. I am a spiritual medium and that's my message.