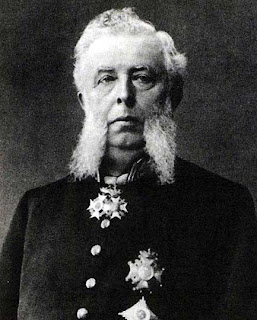 Fred sent me a link to a story about a guy named Jelle Obbemma. I copied this picture from his blog, but that's okay because he obviously took it from the original story in de Volkskrant. Apparently, this fellow Obbemma was from Friesland, and back in 1870, he made a lot of money in shipping and selling peppermint oil. And to do that, he spent a lot of time in Kenya.

As you might suspect by looking at his picture, he was quite the ladies man. And he "spread his seed" all over Kenya. The offspring were named "Obama."

They also mention the family crest, which has the words "Ja, wy kinne" on it, which translate to...

So number one, the next president is the product of not just one out-of-wedlock relationship, but (if this story is true) at least one other. And secondly, apparently he is aware of his Fresian past, reads Fresian and stole his big saying from the family crest of his ancestor Jelle Obbemma.

The last little bit of the article is about people in Friesland putting up signs bearing the slogan "Ús Barack foar President!" The Dutch seem to be pretty much happy with the outcome of the election. Some people seem actually relieved. That office has so much to do with how things go in the world. Not everything, but if you have a nutjob in the office, it just creates waves in the big pool that is the world. So it's better to not have a bully doing that job.

Yes, folks, all roads lead back to the Netherlands.
Posted by Andy Baker at 11:10 AM

Wow, it really is a small world after all.

I was at an early Thanksgiving dinner yesterday and this story came up. One of the guests (Friesian) said that it wasn't true. Which is a shame, really.

Only the Dutch could come up with a story like that...