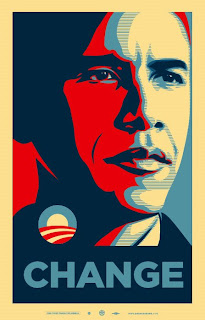 My father sent me another email (I may not have mentioned the last ten) warning against the horrors that will befall the US if Obama wins his bid for the White House on November 4. This email links to a website that outlines all of the terrible things that have happened in the two years since the Democrats got their thin majority in the legislative branch. It's an exhausting PowerPoint that is full of a bunch of lies. It's too much to read, is backed by really dramatic music and it spouts a lot of points that I've already heard debunked.

I would love to think that both of my parents and my father's third wife (that totally sounds Mormon, doesn't it?) think about what and who they're voting for, but they are all really bad about explaining why they believe what they believe. It seems to me that they mostly respond to scary ads and "facts" that they hear or read. We've never really been a family that's big on discussion. My parents more like "Here's what I believe. If you don't agree with me, I'm sorry you won't listen to logic." There's no exchange of ideas. At the end of the day, he's a lovely man, but his politics and religious beliefs are completely what you'd imagine a 73-year-old man from Texas might be. (Think half W and half Cheney.) My parents actively campaigned agaist JFK when he was running for president. True. They went door to door in their neighborhood. Of course, it was Nixon and they loved him, but still - to campaign agaist Kennedy?

At this point, it looks like Mr. Obama will bring home the bacon on Tuesday. They say it's going to be close, but I hope that McCain and Palin get a good quick spanking and that I can go to bed sure that there's at least a chance of some change in the next four years.

I've been listening to a lot of political shows (mostly left leaning - I admit it). One that was very interesting, and was not as obviously left slanted was on This American Life. It's called Ground Game. Very interesting. Go listen. They follow two Black guys going door to door in Pennsylvania for McCain, as well as a few other campaign volunteers and workers.

Four years ago, on the Sunday before the election, a woman named Blanche (I know. Right?) asked me if it was possible that George W. Bush could win a second term. I said, "No. Absolutely not." I couldn't imagine what the US would look like after another four years of his disasterous presidency. It seemed impossible. So I was wrong about that. And now it's four years later and it's the Sunday before the election again and I can't imagine John McCain getting into office. It just seems impossible. So I'm not the best predictor.

This past month, I've run into a couple of people who've said, "Oh yeah. How do I vote?" It amazes me. "Like don't you get registered when you get a driver's license?" Do you have an American driver's license? "No, but I used to." So if that's how it happens, which it's not, you used to be registered to vote.

On the Rachel Maddow show (on the radio), she has a lot of bits between segments where the announcer guy says quick, clever things. One of my favorites is "Still waiting for this eight year headache to end."

Make sure to vote.
Posted by Andy Baker at 4:27 PM

Agreed, Andy. I could just not believe that W would get a second 4 years. I had to pull my car over and cry when I heard the news that Kerry was conceding.