In my ongoing effort to glove the hands of my niece and nephews (one niece, three nephews), I have completed another pair of gloves. The knuckles here read TROM BONE - because he plays the trombone. It's too bad he doesn't play the tuba. I could have gotten away with only making one glove. 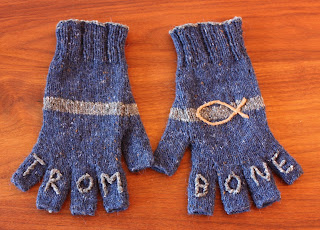 This pair was a bit of a pain. I tried to put a cable pattern on the back and ended up screwing it up, so I ripped it out. Then, I decreased for the thumb gusset too fast and I had to rip it out. I did more ripping on this pair. It made the whole process seem really long. It should have only taken a week, but it took about ten days. But I have to say, I am still crazy about the Knucks pattern.

I like the gray stripe, although it seems a little bit low, but that's just how it happened. It's very Dallas Cowboys, but it wasn't intended that way. I got the gray through a trade last year. It's turned out to be very handy. 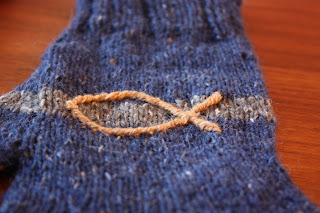 The fish on the back of the hand is supposed to be that fish symbol you see in Baptist (and probably other) churches. He's a church goer, as am I, but we don't do the fish symbol at my church. 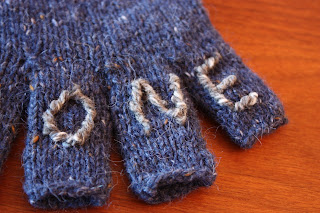 This embroidery thing is either something that I read about or something that I read about and misunderstood. At any rate, it's sturdy and tied on tightly. I find those letters a little difficult to control. I enjoy the process of embroidering, but I don't always enjoy the results. I'd like to be good at it. The chain stitch alone doesn't do it for me.

There are three red X's on the side of the "trom" glove. Like if you were to karate chop someone in the throat with that hand? That's where they are. And the last little detail is the gray edge on the bottom. I knit the last row in gray and then bound off in gray using a sewn bind off. 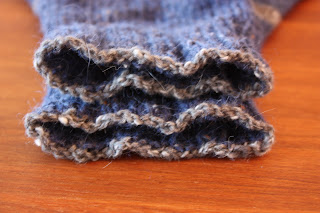 So Ben has some gloves, and I'm on to the last pair. I like the gloves thing, but I'll be ready to do something else, like a hat or something. I like the small projects.

And now I've posted. I know I'm behind on the NaBloPoMo thing, but I'm of the school that I just have to do a post for each day this month, so I'm still in the game in my book. Check out Lou for someone who is a little more dedicated to blogging every day. Go Lou! At any rate, I've got some catching up to do.
Posted by Andy Baker at 6:26 PM

Finding this whole NaBloPoMo thang more difficult than first thought. Loving the knucks!! You have got very creative with them. how did the TomTom work out?