The weather all day - and since Christmas - has been colder than a [insert metaphor here]. It's been awful to walk in, to ride a bike in or even just to be in when I go outside for a while. It's a bitter freezing cold that feels like someone is holding up giant blocks of ice to my face after I've been out for a few minutes. My toes and my fingers are immediately sore with cold. I've gone out for a bit each day, but I have mostly been staying in doors in the warm rooms of the apartment. This what it looks like outside. Gray and frosty. That's not really snow. That's just frost. 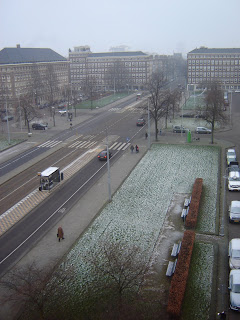 I rode through Vondelpark yesterday and there were people ice skating on a pond. It's really cold out. Reports were that it would last about a week. Weeks' over. Let's have some less harsh cold now.

There are already fireworks going off. I didn't want to go outside much today because there are always fireworks going off and it makes me jump. I saw a kid (of about eleven or so) come out of a fireworks store today, hold up a bottle rocket in his fingers, light it with a little cigarette lighter and let it go off into the distance. Then he turned around to see where it went. Yes, that's who they sell fireworks to. I'll stay inside.

I've spent the last few days organizing things. For instance, I organized my yarn and my knitting bags. My stash is sorted and cleaned out. (You can rest easy now.) And my Ravelry account is updated. (You can look if you're a member.) And then I took a small pile of ball bands and pieces of yarn, matched them up and pasted them into a book. Amazingly [insert word here], I know. But it's what I wanted to spend that two hours doing and now it's done. My life - my agenda.

I think I don't do more things like that because it makes me feel like I'm going to die. Like if everything is organized and logically placed, It'll be fine for me to die. So does having little pockets of chaos around the house keep me alive? I think Fred might be willing to risk it to get them straightened up. I'll work on that and get back to you.

We have our evening planned. We're going to eat duck (in a quince and wine sauce) with Brussel sprouts and potatoes and finish it off with a tiramisu (store bought). We're going to watch Harry Potter 4 and 5 (guess what we watched last night and the night before) and I'm going to work on a Very Warm Hat, which I started on Monday night. I have about three inches and I've done the color work, so it's just hours of knitting in the round. Good for movie watching. (My colors are red and brown tweed.) My color work is pretty fabulous. I'll take some pictures tomorrow.

So that's our big gay wild evening. We're going to eat something with the word quince in the name (we're substituting pears), watch two big bidget Hollywood sequels about teenaged wizards, and I'm going to knit. If there's anything more fabulous, I'd like to hear it.

And at midnight, we'll pause the movie, pop open some champagne and look out the window for a half hour while the sky lights up with fireworks. And I'll thank God that I'm inside.

It's the perfect ending to a very interesting year. 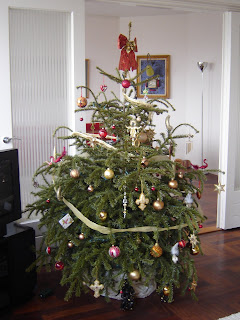 And this is a picture of our tree, which might just be my favorite we've ever (out of four) had. I think the fact that it's filled with ornaments turns my crank. Every year it's got more stuff on it. If Fred sees anything red or gold and shiny, he buys it. He loves sparkly things. He denies it, but it's true. This is the first one we've ever had that's not in a pot. It has a resevoir of water, but it's drying out. I prefer a tree in a pot.

Have a very nice New Year and best wishes for a very interesting and productive 2009.
Posted by Andy Baker at 6:45 PM

You sound just a wee bit defensive about taking a couple hours to organize your stash: don't be! And I have to say: only 2 hours!! You must be very efficient when you organize!