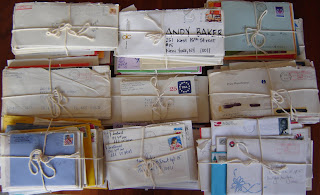 At Thanksgiving in Ohio this year, I dug out an old suitcase I'd left at Patty's before I moved to Amsterdam. The suitcase was packed with old journals I'd kept and letters that I'd received throughout my time in NYC. I had a fairly large box full of cards and letters in my apartment for many years, but when I moved, I went through and threw out all the chaff. I was fairly liberal with keeping things. If a card said almost anything more than "Love, Debbie," I'd keep it. But you'd be amazed how many cards I threw out (read: recycled).

The next thing I did was sort them by who they were from (some groups were combined) and then I tied them up with string. I love that I did that. It made it feel like I'd found some old trunk full of old letters. It's like the Andy of five years ago packed a present for the Andy of the future filled with exactly the kind of things he knew he'd love to find.

One of my initial ideas was to read through some of them, so I picked a old friend of mine (we'll call him Larry) with whom I am no longer in contact. Larry had had a fairly good job in a bank and then he got caught embezzling money, so he went to jail. Some of the letters are from jail. And a lot of the letters detail what happened after his conviction. It's sort of an interesting story, but it was depressing reading them because I know the end of the story, which is basically that Larry loved to drink - a lot. We lost contact.

So it wasn't as much fun as I thought it would be. I tied the letters back up, took a couple of pictures and took them to the basement for storage. Maybe Future Andy will have a higher tolerance for looking back. I just like that they're there if I wanted to look at them.

When I was boxing these up five years ago, I was already receiving less letters. I was already on the email wagon. So these are really from a bygone era. I can't remember the last time I actually received a real letter. Cards yes, postcards yes, but not letters. A person would have to be a real luddite to write a letter instead of an email. I know a couple of people like that, but there's no fear of them reading this because they don't have a computer. They say things like "Blog? What's a blog? Oh...I don't do the online."

So people even a few years younger than me probably don't have a box of letters from high school friends - for instance. I like old stuff, old letters. And I love the look of these little parcels of letters all tied up with string.

And I'll enjoy seeing them again in a few years when we clean out the basement.
Posted by Andy Baker at 11:43 PM

I'm still a letter writer. I also have a suitcase containing bits and bobs from my yesteryear including high school classroom notes from friends passed under desks. A few of my close pals have passed away through cancer or tragic accident so it makes these little items even more treasured.