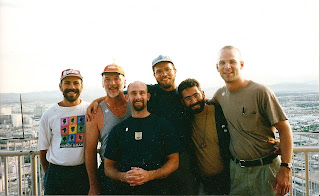 Back in the day with Andy, Randy, Ken, John, Mark
- and that's me on the end. (Look how tall I am.)
A couple of days ago, I was listening to the latest episode of Y Knit - "a knitting podcast from two yarn and needle junkies who just happen to be men." They were talking about a men's knitting retreat outside San Fransisco last summer and the East coast retreat that happened before that on the East coast. I think they had about twenty-five guys there. While I was listening to them recount their weekend, I started thinking back to times when I did things like that. I've never been to a men's knitting retreat, but there was a year when an old boyfriend and I went camping a lot in the woods of Pennsylvania and we were around a lot of men the whole weekend. And there were the...square dancing conventions.

I was a square dancer for about eight years in NYC. I was quite active in the club, and then I got on the board and the next year I was president ("of the largest gay and lesbian square dancing club in the world," I used to like to say) and then I became so burned out that I avoided contact with the club. Not the people, just the club. But that's another story.

During my prime as a square dancer, I went to the IAGSDC (International Association of Gay Square Dancing Clubs) convention every year for eight years. Gay square dancing is not exclusively men, but it's dominated by men. Women (both gay, straight, and trans) are the minority, so it's got a very male vibe - and a very gay male vibe. Walking in used to feel like entering a room full of love to me. It is what I think of when I hear someone say, "Square dancing is friendship set to music." (How often does someone say that?) I think if I could go back in time for a day, it might be to a square dancing convention - or I could just live in the present and go to a convention now, huh?

There are also fly-ins where square dancers converge on a city (Chicago, Cleveland, NYC, Miami, San Francisco) and dance the whole weekend. (Many hours of preparation went into these weekends.) I had friends all across the country. The year I was president was really nice because I had a little noteriety and that opened a lot of doors. (Plus, I was on the younger end of the age spectrum, and that never hurts in those situations.)

There's something really nice about being away from life for a weekend of focused fun (knitting, square dancing, camping) with a group of men. There's not any opportunity for that here. No male knitting retreat, no gay square dancing and forget camping.

My friends here are mostly women. I know a few guys in specific social situations, but by and large, I socialize with women. I've always hung around women: when I was child, in high school, in college, after college. Women are a very comfortable demographic for me. It was when I got to NYC that I had male friends, and I miss it sometimes. I'll have to work on that.

But thank the Lord for women. I likes the ladies, as they say. In fact, I'm off now to a small (I think) party given by a friend who happens to be...of the female persuation. And I am looking forward to talking to some people.

Fred asked if it was a knitting party. I said, "I seriously doubt it, but I'll be prepared if any knitting breaks out."
Posted by Andy Baker at 5:27 PM