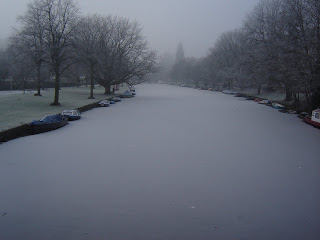 It's so cold lately that people are talking about the elfstedentocht, which literally means "Eleven Cities Tour," although it's hardly a tour I'd like to go on. It's only held when the canals are really frozen and it's held in Friesland - a northern province of the Netherlands. The last one was held in 1997. You can read about it on many other sites. I won't go into it except to tell you the basics. They go through eleven cities on the "natural" ice, which has to be at least 15 centimeters thick the whole way, and a lot of people (one site said 16,000) take part. You have to be a member of a certain organization to do it. You can't just put on some skates and take off. So don't start shopping for skates if you don't already have them. And don't try to apply for memebership in that organization. They capped the membership. Can you imagine?

Marathons and races are not the kind of things I really go in for, in terms of watching - or (oh my God) participating in. I never bothered watching the NYC marathon. I would have gone to a party, but I was never invited. (I never really hung around people who did stuff like that.) I participated in the second biggest sport of marathon day in NYC - bitching about how that stupid marathon was screwing up traffic. We have a marathon here every year, but we only watch it because we happen to be walking by the window while we're cleaning. (We live right down the street from the starting point.

There's also the idea of skating on natural ice, which totally gives me the shivers. Fifteen centimeters is almost six inches, but I'd rather it was solid all the way to the bottom. We saw some people skating in the park a week or so ago. I know that little pond is probably only a few feet deep, but I couldn't have done it. I think I saw too many after-school specials with kids falling through the ice. You get all wet and cold. No thanks. Plus, isn't it really slippery out there?

While going to work today, I went past our canal - shown above. It's frozen, but there's no way anyone would skate on it. It doesn't even look like it's starting to get thick. Some ducks walked on it but there's water around the edges. 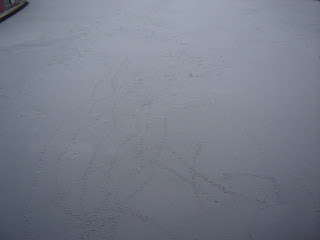 The whole frozen canal thing is really romantic. It's one of those things that I think a lot of people assume happens all the time, but it doesn't. That was just that mini ice age a few hundred years ago. Of course canals look good most of the time. Any weather, any time of day, (except after Queen's Day).

We got a dusting of snow this morning. It made everything really pretty, so I took my camera out and took some snaps. It's really pretty, almost prettier than if we'd gotten a real covering. This is the kind of cold I really like. It's cold and there's snow and ice, but it's not that sharp, cutting cold. I have to go to a thing tonight and I'm not really worried about it because I won't have to (I hope) fight against the wind.

What I wouldn't give for a fireplace.
Posted by Andy Baker at 4:46 PM