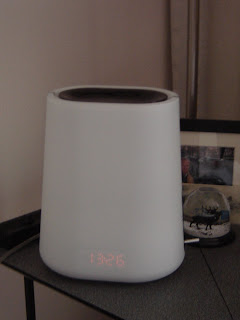 I am crazy about my new Philips Wake-up Light. It's one of those gifts that makes me happy every time I see it or think about it. It's a gift from Fred for Christmas. When we were discussing Christmas gifts, I said that we should just tell each other what we wanted so there wouldn't be any guessing. (He's incredibly difficult to buy for.) He said he would rather not say, and then he admitted that he didn't want to say because he didn't know what he wanted. I said, "Well, I'll say. I want a Philips Wake-up Light. And you shoudl buy it tomorrow before they sell out."

My mother woke me up all throughout high school. I think the first time I was responsible for getting myself up and at 'em was in college - and it took me a while to get good at it. (I knew a woman who didn't do her own hair until she went to college. She sat in front of the mirror the first day and just wondered what to do. So I'm not the worst. Audra is.) I've always hated alarm clocks. I could never find the one with the right sound. And if it had a decent sound, then it clicked or something, which I found distracting.

In NYC, I had a loft bed and I put the alarm clock (a small, cheap thing that beeped) on downstairs so that I would have to get up. Once I was downstairs, I usually just started the coffee and started my day.

When I moved here and needed an alarm clock, we went to a store on the Negen Straatjes and I got a clock that I was happy enough with except that the light from the numbers was so bright that it kept me awake and that it had a horrible screech when the alarm went off. I put a handkerchief over the light every night for years and cursed the screech every time it went off. The only good point was that it was very sleak and modern.

Now, that clock is in the closet ready to pull out for any guest who comes to visit and needs an alarm clock - now that I have my Wake-up Light.

Yes, it looks like a humidifier, but it's so amazing. First of all, the light on the numbers is adjustable. So I can set it really low, the way I like it. In the dark, you really don't need a bright light to see what time it is.

Secondly, it wakes you up by turning on a light - slowly. It gets to the brightest setting (the one you choose) when the alarm is supposed to go off. And then if that doesn't wake you up (and it usually wakes me up), there are several gentle sounds you can choose from instead of the screech. There's birds, drum, jungle noise and something else. You can even choose the radio if that is your thing.

This is the alarm clock I've been waiting for my whole life. Fortunately or unfortunately, I haven't had to use it to really get up yet. I've only had it since Christmas and I've been on vacation since then. So I get to use it for the first time tomorrow morning.

I know this sounds like an advertisement, but I found something wonderful and I just want to tell everyone. It's like finding religion or knitting.
Posted by Andy Baker at 1:37 PM

I know someone who didn't know, at age 39, what size shoes he wore because his mother always bought them for him. He wins the prize, I think.

I'd be afraid of sleeping through it, Andy. I can imagine the gentle sound of bird song, and a gradually brightening light would be easy to sleep through.

Does it scream at you after a while as well?

P.S. How big is it? It look enormous in the picture, but it's hard to get a sense of scale.

I had a friend who, when she moved out of her parents' home, didn't know that you were supposed to boil pasta in water - she just put the pasta in the pan and put it on the stove...

ooooo I want one of those lights, tomorrow. It sounds wonderful. I'm such a light sleeper that I'll probably wake up when the thing makes that electronic high pitched sound that lights make when they come on.

If it's the Audra I am thinking of, she doesn't count. She's from another planet. We just spent the past 20 minutes explaining how a checking account works and how to write a check to our 23 year old au pair. Also in the list of things she's learned during her tenure with us: how to make a bed, and how to separate whites from darks in the laundry.

ooh, I totally need one of those! I sleep through my iPod alram most mornings, until about six tracks in. Light would help.

Need To Increase Your ClickBank Traffic And Commissions?