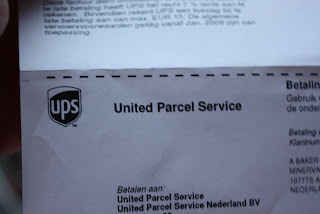 When my darling sister sent us some vases a few months ago, I was thrilled because it was such a perfect gift and so much thought went into it. Then a few weeks later, I received a bill from UPS telling me they want me to pay €84,91 in taxes. This number represents, of course, a percentage of the value of the contents of the box. (I don't know what that number was.) I called and wrote an email trying to explain that this was a mistake and that they were gifts, but I finally gave up and paid it. I was getting bills for late charges and I had to do it all in Dutch, which was a pain.

The problem was that the value Kathy wrote was over a certain amount and they charge tax because it looks like goods on bringing goods into the country. And it probably looked like it was a "good" because it came from her place of business.

Kathy, of course, didn't know this would happen, but please take this cautionary tale and learn from it. If you ship overseas, be careful of the value you put on your stuff. I always put €20 to €30 as the value when I send something, even if it's worth a lot more.

On the other hand, the husband of a friend of mine shipped a bunch of good stuff - like his favorite knives - when they moved here. Knowing he might be taxed for bringing his own stuff into the country, he put the value of the stuff in the box as $50. And then what happened?

And then the company lost the box. So the most he can claim for all his valuable stuff and knives is $50. He keeps telling them to keep looking for it. He remains hopeful that it'll be found. 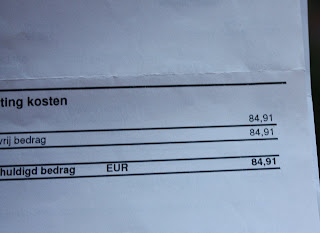 It's a roll of the dice every time you ship. The averages are good, but things do get lost occasionally. That said, I err on the side of taking a chance. I'm much more risk seeking than risk averse. But that's me. It's how I'm built.

It's not just a roll of the dice whether your parcel gets there, but also whether you get clobbered on import taxes. I've never had to pay anything, and have ordered my fair share of fabric from the US. But I think I've been lucky, it seems they can't be bothered to check every single parcel (unless it's really big).