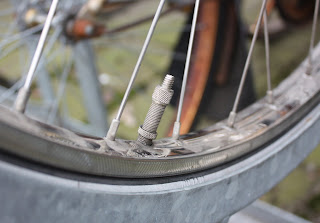 Last night after choir rehearsal, my bike had a flat tire. It had been fine when I rode in, but it was completely flat two and a half hours later. When I looked at it, I saw that the top piece of the little thing that you pump it up with (there's a name for that, right?) was missing. (That's the piece in the middle of the photo.) Someone had unscrewed it and walked away with it. So even if a pump magically appeared, there was no way to make the air stay in the tire. I just shrugged and shook my head. It was about 9:45 and I did not feel like dealing with it. I figured I'd take the tram home and return today.

I usually ride home from choir with my friend, Dorothy, an Amsterdamer who is hovering somewhere around seventy, plus or minus a few years. I said, "My tire is flat. I'm going to take the tram home." I showed her the tire.

Twice at this point in the story (once to Alastair and once to Fred) the person hearing the story has expressed shock that Dorothy would suggest vandalizing another bike (just because it's old?) and stealing a vital piece of it. She was doing no such thing. I understood completely what she meant. There are countless abandoned bikes in Amsterdam. They have one tire or no handlebars or the seat is missing. They are obviously abandoned and are good for the picking. Still, I thought the chances of us finding a piece that fit before my patience ran out was slim.

Dorothy returned with a piece from a mountain bike and it fit.

Fine, I thought. You have the piece, but where are we going to find a pump at this hour?

She suggested that maybe they have one in the church, and people were just coming out of the church. I bumped into Alastair on my way back in and asked if he had a pump. Sure enough he did. He carries a tiny little pump in his backpack for emergencies like this. It's totally cute. I pumped it up and we were on our way. The pump was about €3 and I plan to get one.

I always look at situations like this and say, "Just my luck!" Not the random person stealing the initial piece - that can happen to anyone. I'm talking about having an "echt Amsterdamer" with the street smarts to know where to go looking for a missing piece like that and a guy with a pump around in my time of need. That's the kind of luck I've always had.

My friend, Patty, says that I have a little white cloud over my head that follows me around. (White cloud is good luck, right?) Affirm it. Say it. Believe it. I am a lucky guy.

Thanks Alastair and Dorothy! You saved me a couple of hours of trouble today.
Posted by Andy Baker at 4:41 PM

You see, Andy, that's the difference between you and me. You see Dorothy as the echte Amsterdammer for thinking of 'borrowing' a valve (that's what they're called) from a dead bike.

For me, the echte Amsterdammer was the @#$%$#@ git who thought that helping himself to your valve was in any way remotely a reasonable thing to do. Why didn't he take the valve from the dead bike? Because your bike was closer and he didn't think of anyone but himself.

I would have been hopping mad!

But then, you're a better person than I am. Even if I do have a little pump in my rucksack!