I've been a big proponent of public transportation since the late Eighties when I moved to Brooklyn. Not having a car gave me an appreciation of buses and subways - and an understanding of how they work. Walking is nice - especially in NYC - but if it's raining or if you need to get where you're going just a little faster or if you're carrying a lot of stuff and don't want to pay for a taxi, public transportation is the way to go.

In Amsterdam, I usually ride my bike. Going to the Center or around town, it's essential. But on a regular work day - when I'm off to see a student - I generally use the Metro, because it's in the other direction and I don't want to show up glistening with sweat. By the way, the Metro is not the subway, the tram or the train. It's the Metro, and you can't use those terms interchangeably. 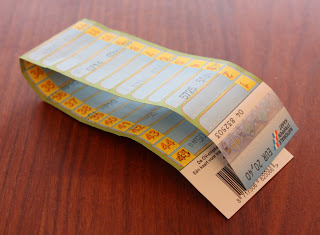 Since I've been here, I've always used the Strippenkaart - you have to if you're going to ride any public transit. If you click the link, you'll see that it's the Nationale Stippenkaart. You can use it everywhere in the country. You don't have to buy a separate one for The Hague or Gouda, and it's good for buses, subways, trams and the Metro. It's a pretty good system.

The problem with this system is that you have to have some understanding of zones. How many zones is it from here to there? You have to stamp that many zones plus one, which a lot of people (read: visitors to our fair city) don't get. (I once saw a lady get on and stamp the next little strip. She had half her card filled up like that. Good thing she was a little "older." If I did that, the transit police would give me all kinds of...heck.) Generally, I don't really know how many I should be stamping, so I guess - usually defaulting at two zones plus one almost every time I get on. I figure it averages out.

The thing is that you can go months without anyone checking your card. So essentially, you've paid when you didn't have to. (Some call that stealing.) And if you forget to stamp and you get caught, you can get a fine. I've been known to speak very American when explaining to the nice officer that I didn't understand how this thing worked. (My accent is all I have to work with. I don't have breasts.) 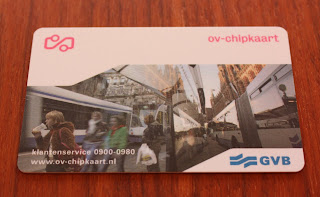 Recently, the OV-Chipcard has been introduced. You swipe it when you get on, you swipe it when you get off and it does all of the accounting. I'm crazy about it. I loaded mine with €20 and I've been off to the races. The scanner reads it through the fine leather of my Ferragamo wallet. It says, "Goed Reis" when I get on and when I get off, it tells me what the ride cost me. (And I think I had been over-paying on some rides.)

When I was in NYC, they introduced the subway card. Tokens were phased out and cards were introduced. People whined, of course. People just do that. What the NYC Transit Authority did that I loved was make a week and a month pass. I went to Brooklyn every day for work, so I was on the subway all the time. That totally saved me money. If they introduce that here, it might behoove me to get that.

This year will be twenty years that I haven't owned a car. One of the things I loved most about NYC - and that I love it about Amsterdam - is that you don't need a car. I'd love to say I don't have a car because I'm doing my part to save the planet, but it's mostly because having a car would be a huge hassle. I don't know that I would have been so in favor of moving to Amsterdam if I would have had to get a car. Reading Kathy's post from yesterday makes me glad that it's not a part of the mix.
Posted by Andy Baker at 4:46 PM

Hmm, I'm still to be convinced about the OV-Chipcard. It has disadvantages compared to the strippenkaart - mainly that you can't share it. When a friend visited me, we both took the tram back to the station on my strippenkaart - in the glorious new world of the chipcard, I'll need to buy a second card AND load it with credit before a friend can travel with me.

Also, most journeys I've made would have been dearer with the chipcard as well. The zones never bothered me - I thought they were pretty simple, and marked on the map. You can always ask the conductor if you're not sure.

I just don't see what problem all the money that has been spent on the chipcard is supposed to be solving. When they gave a choice on the Metro, over 90% of people carried on with the strippenkaart. The only way to make them more popular was to refuse to accept the strippenkaart any more.

If the chipcard was so good, they wouldn't need to force folk to use them...

oh - strippenkaart.. I'm getting sentimental! Line 5 and 51 to Uilenstede - ah, the memories! :-) And I also remember that the Spanish girls of my exchange-program never bothered to stamp - bad English with a Spanish accent, you can't beat that! ;-)
I also really liked the fact that you don't need a car in Amsterdam. Here I have a fancy Scott mountainbike, there I just had - a bike. The lock was more expensive. Now that I live in a rural area with really bad public transportation service I have noticed that I sometimes cannot be bothered to go somewhere because I always need the car. Especially in winter of course. Besides I do have a bad conscience going somewhere just for fun.
So I'm home reading blogs! :-D