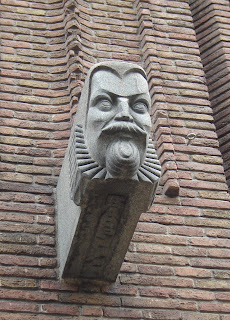 It was very gray today. I'm not a huge fan of the sun in general, but it's nice to see it some time during the day - as long it behaves. How the sun comes into our living room on sunny days has been an issue since I arrive here five years ago. Fred won't even talk about drapes or shades for the windows in the living room.

Granted, it looks very nice (read: not cluttered) without them, and we're up on the fifth floor, so it's not like we need them for modesty, but I would sometimes like the option of sitting on the couch or in the dining room in the morning and not having to dodge the sun by repositioning myself behind a post or a piece of wall. I always think, Acid Sun when I come into the living room in the morning on sunny days. It feels like a nuclear bomb has gone off and I'm standing there in the first millisecond before I'm vaporized.The change from the bedroom, which has hotel curtains so no light can come in, is so drastic that it's disturbing. Some times in the summer, I'm forced to pack up the whole show (computer, books, etc.) and move to the bedroom until noon and the sun is high enough in the sky that the living room is safe again.

Fortunately for me, I live in Holland and sunny days are not that common. People tend to think I'm some sort of a curmudgeon with my anti-sun thing. I've heard people say, "Well, I'm from Australia [or Florida or Arizona or South Africa] so I like the sun." With that logic, I'd love it too. Texas is known for being hot. There's a desert in Texas. We had cactus growing in our front garden when I was a kid. It gets hot. But I don't particularly like direct sun light. That logic is also flawed - I must say - because with it, people from here would love cloud covered skies, and they don't. No one complains more about the weather than the natives.

Years ago, my mother said, "I really like overcast days." I said, "Me too!" I always loved them in Texas. It was such a relief from all that sun. And to me, they just made NYC all the more beautiful. So it follows that I love overcast days here too. And it's overcast a lot here. Welcome home, Andy.

Have I ever mentioned that when I was teaching high school there was a marked difference between students' ability to sit and listen when it was sunny and when it was overcast? On sunny days (especially in the spring) it was like they were on speed. (And I've...seen people on speed, so I know.) On overcast days, they were much more manageable. They were sort of dull and listless. I loved it.

So it was gray and overcast again today. I should have loved it, but I sort of feel like I'm getting Seasonal Affective Disorder. Don't worry, I'm just being dramatic. I just need a little change in the weather - a little sun maybe?
Posted by Andy Baker at 6:41 PM

Personally, I love overcast days, too. It is very hot in Texas and the sun seems to beam down constantly during the summer days. Is it the "you want what you can't have" theory?

In Scotland sun is a luxury, but one I do not crave. Today however was a great spring day with a little sun, birds chirping and crocuses busting out all over. Sun is refreshing in such doses as long as it doesn't blind or burn..right?

Its so true, Andy, there are grey days, and there are Grey Days, and at the moment I could really do with a vitamin D hit, or a trip to a thermal spa or something!

The bit about your students and the weather is all too recognizable. Barometer changes always really affect them as well. Some days they're completely unmanageable, and then it turns out all your colleagues experienced the same thing, and that there's a really big storm brewing. Might as well chuck in the lesson plan then.