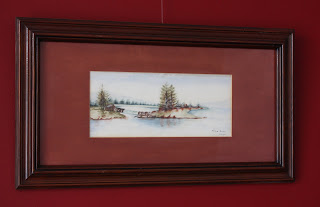 When I told my father that Fred and I were going to get married, I didn't know whether to expect a sermon or a pithy amount of money as a gift. Instead of either of those, he surprised me by sending a painting. However, rather than sending it through the mail, he and his third wife wrapped it in layers of bubble wrap, put it in two layers of boxes with a bucket load of Styrofoam peanuts, tied rope around the whole thing, and gave it to Kathy to bring when she flew over for the wedding. At the end of the day, it was probably a much better idea than mailing it.

It was also a much better gift than I expected. My father is the type to try to solve all problems by throwing a little bit of money at them. Problem: gay son getting married to a man in another country. Solution I expected: a crisp one hundred dollar bill.

The painting is not just any painting. It's as close to a family heirloom as the Baker family gets. My father's parents were not rich people. His own father was a ne'er-do-well who couldn't really hold a job of any kind and his mother died when my father was eight-years-old. Other items salvaged from the wreckage that was the family house are either furniture (no amount of Styrofoam peanuts and rope could get Kathy to carry those here) or incidental items that I'll either see one day...or not. 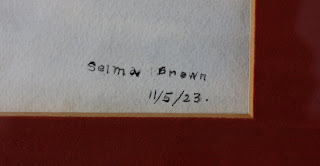 This painting is one of a handful that my paternal grandmother painted before she died in 1944. My father wrote this (in his very interesting handwriting) on the back of the painting:

This picture hung in the downstairs hallway of the old house in Anson for as long as I could remember. We moved to that house in March of 1943. Mother died there in March of 1944. When we were getting things out of the house in the late '60's, this is one of the paintings I got. I hope you enjoy it as much as I have.

It hung in our house in Hurst, Texas for years and then it moved to his office and after that it hung in his current house where he lives with his current wife. I had requested one of the paintings when he passed away and I wasn't expecting that for a long time - if ever.

I don't have a lot of this kind of stuff. I've moved twice, getting rid of a lot of extraneous articles both times, and I didn't have much traditionally family things anyway, so this means a lot to me. I like that it's made its way all the way from Anson, Texas to Amsterdam.

The painting is probably not worth a hundred dollars, but it is worth much more to me in terms of the thought that went into it. (I'm really glad he didn't send money.) And I know it was a sacrifice for him, but I hope he knows how much I appreciate it.
Posted by Andy Baker at 3:31 PM

I choked up reading this post..damn it I'm a sentimental so and so. Lovely gift but it goes to show that sometimes its not in the gift, its in the giving. A humble way of your father showing his love.

"And I know it was a sacrifice for him, but I hope he knows how much I appreciate it."

Have you told him? My father and I have had a rocky relationship (not only the gay bit, but that has certainly been a big part of it). He's getting older, and he's in declining health. On a phone call, I told him that I love him (NOT something my family ever used to say much, if at all), and he replied that he loves me. It floored me--both because I was touched, and because I thought "OMG, my father is dying!"

In my family, that passes for humor!

Anyway, I encourage you to tell him what you've told us. And if you've said it before, say it again.

Thank you for publicly acknowleging your Dad's gift. Your Dad had it professionally packed. He wanted it there safely and he trusted Kathy to get it to you AND Fred safely, and in time for the wedding.
He even thought through the rope so that the airline baggage handlers would be less likely to drop it. He wanted to make it easier for Kathy to carry.