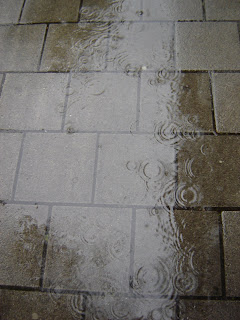 For a completely wet, rainy day, I've been out in it a lot, and we're probably going to have to venture out again for victuals. (That's the correct spelling of "vittles," if you didn't know that. Thank you, Mr. Dickson.) Mr. Dickson, my twelfth grade English teacher, once told me, "Mr. Baker, you are very whimsical." My friend, Chris, still calls me whimsical to this day. I'll take it. I've been called much worse.

My day began with a call from a woman speaking in fast Dutch telling me that I'd left my "achtertas" (meaning blah-blah bag) somewhere. I listened to her speak as I located my man purse and responded with an "uh-huh..." and thought, It's right in front of me. I didn't know what she was talking about, but she seemed convinced, even telling me that she'd found a letter in it with my name and address on it. I agreed to go by later and pick it up - whatever it was.

The call turned out to be from the dentist office downstairs - our dentist. I didn't recognize the name because they've recently changed owners. I left my briefcase in front of their office when I was locking up my bike last night. I had my hands full and I didn't miss it - and I wouldn't have missed it until Wednesday morning. Apparently it was there the whole night. Fred said that he'd seen it when he came in last night, but hadn't connected it to me. So we either live in a good neighborhood or I had a little angel watching over it the whole night - or both.

Fred bought a computer today. It's his first personal computer. Up to now he's only had computers from work. He bought a Mac. (Hooray for our side!) We left the apartment at 10:00, rode through the drizzle, picked it out and came back. I'm glad he has a computer of his own now. He certainly won't be on it as much as I'm on mine, but it seems to me that computers find ways of making us use them.

After we got back from the computer purchase, I left to have lunch with a woman I haven't seen in a couple of years. Korean food, very interesting. Lots of talk about teaching English and how our lives have changed (or not) in the past couple of years. (She's got two kids, but I'm the one who got married.)

Today is my last day of vacation. Of course it hardly feels like vacation since I had a full day of work yesterday, but I had a whole week off of my one job and that's always good.

On Facebook, I wrote in that little status bar that starts with Andy is..."on spring vacation, and he's spending it in Amsterdam." I did that so people who don't know me well would think that I was on a very exotic trip to Europe. Of course anyone in the know will say him or herself, "Amsterdam? Oh wait. He lives there...Isn't he whimsical?"
Posted by Andy Baker at 5:23 PM

I love you! You make me smile every single day. And - you are a great big brother who, yes, is very whimsical!