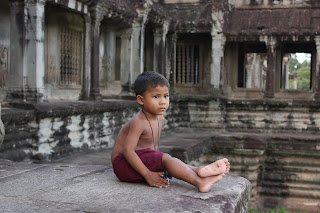 This is a picture that either Fred or I took at Angkor Wat in Cambodia. I say either because we both claim it. I remember taking it and he remembers taking it. (But I know I took it.) We don't have many pictures of small children, so this will have to serve as an illustration of our afternoon. (A peasant child in an abandoned palace?)

This afternoon we had Fred's sister and brother-in-law, their daughters, their daughters' partners (both male) and one of the daughter's two small children over for a visit. The daughters weren't able to attend the party we had for our wedding, so they came over today to sit and chat. If you ever wonder if your house is child-proof, invite a couple of kids over and watch them run towards, and try to touch, everything within reach. I was amazed how much stuff we had to put on window ledges and tables. And if there was an open door, they went through it.

Our apartment is obviously not a place where children live or are frequent visitors. It was strange to see the floor covered in toys and all the precautions that had to be taken to keep the kids from damaging themselves or (God forbid) our stuff.

I wouldn't mention this time thing except it seemed strange to me when I first arrived. We would arrive at someone's house and there would or wouldn't be dinner - and I didn't know why. Or when I was asked what I wanted to drink (at, 5:00 in the afternoon, perhaps) and I said, "koffee," and I got a surprised look like I'd asked for Tang or Tab. When I remarked on this later, Fred said, "Well...it was five o'clock." I think five o'clock is a fine time for a cup o' joe. Obviously, they don't.

This communication problem stems from the fact that these rules are a completely new concept to me. As a child, we rarely had anyone over to our house. My parents didn't socialize like that. And in NYC, I usually met people out at a restaurant. I knew people for years and we never saw the inside of each other's apartments. It's very different here. We socialize much more at home, sort like I imagine life outside NYC to be. Like they do on TV shows. I like it.

If we were to move somewhere else (the US for example), this socializing thing - the having people over for coffee in the afternoon or dinner parties - is definitely something I'd want to take with me. It feels very adult. They come in, we take their coats, we do the three kisses or handshakes for greetings, we chat for a few minutes and then we take drink orders. It's very civilized. And I know how to do it now, so it looks effortless. I used to go over the schedule with Fred. Now we just do it.

I was talking to someone the other day about the little details of life that are different here. If you look at the big picture, you almost can't tell the difference between the US and the Netherlands. But when you zoom in and see how things are done, in what order and at what time, it can be really different.

Fred's family is (generally) very nice and very welcoming, especially this group. Fortunately, at this point, I'm a fixture and they're used to my strange ways, the way I sit quietly and listen and my accent. There are so many things I didn't bargain on when I moved here. I'm glad I didn't know. Ignorance is bliss.
Posted by Andy Baker at 5:53 PM