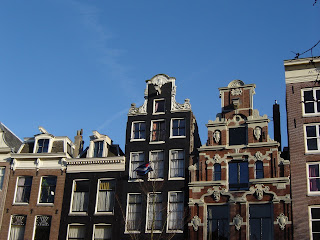 The Dutch Phrase of the Week this week means "It's going too far, it's getting out of hand." Interesting how that one showed up in my mailbox today.

Let me just say that my experience is that sunshine makes Dutch kids go nuts. It's like an overdose of sugar. Mr. Baker was ready to snap like a brittle twig - and then he did.

Years ago, while living in NYC (and maybe Texas), I heard "everyone needs twelve hugs a day." I heard it a couple of times. At that point in my life, I was at a place where I would have had to put in a little effort to get twelve hugs in, but I was in circles where that sort of thing happened. People hugged and it was just an accepted form of affection between friends and acquaintances.

Much less hugging goes on here. People might do it, but it's not the same, and I'm not involved in any circles of huggers. (And when it's put that way, I'm sort of glad I'm not.) Also, the kind of hugging that goes on here is different than the hugging I grew up with. It's like when you shake hands with someone who doesn't really know how to do it. There's that awkward thing with hand shakes where they squeeze too quick or too hard. Or they don't squeeze at all. All that goes on with hugging too. They've seen it done. It looks simple. What could be so difficult? And then they screw it up.

When people greet here, they generally kiss three times: right cheek, the left cheek and the right cheek again. It seems like it's a little more intimate somehow - I mean it's your lips and their cheek. It is more intimate in a way. (By the way, let the record show that it's usually a woman-woman, woman-man, gay guy-gay guy thing. Most straight men opt and go for the hand shake.)

But compare a couple of pecks on the cheek to pressing your chest against someone and wrapping your arms around them for a quick-but-not-too-quick squeeze and it doesn't seem like much. But it's nice and it's sort of exotic. It's what the natives do.

I was introduced to kiss-greeting in NYC where we always did the one, usually on the cheek. At first seemed like such an invasion of someone's air space. But I got used to it. If bodily contact bothers you, there's always the LA air kiss.

So last night, I went to another dyeing party. This time I just used Kool-aid (cherry and grape). Everyone else used gloves. I didn't. Today I have red hands. I got a couple of hugs last night. I never really notice the lack of hugs here until I get one and I am with people who have some history of hugging. I was nice. Because after yesterday at school, Mr. Baker really needed a hug.
Posted by Andy Baker at 9:24 PM