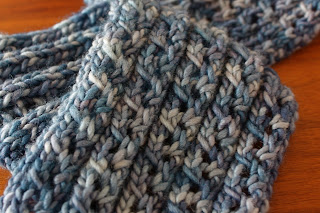 Today in a Ravelry group, I read about a survey about men and knitting. And because I am the type of person who takes surveys, I took the survey.

There were some general demographic questions regarding age and income and then there was a question about how big my stash is. (For anyone not 'in the know,' a stash is all the unknitted yarn one owns.) The answers ranged from '0-10' balls gradually all the way up to 500+. I can't imagine having that much yarn.. I put myself in the 30-50 ranged and it think that's stretching it. It's probably right below 30. Then it asks a lot of other stuff about how you think men are viewed in the knitting world and about the amount of patterns and books geared towards male knitters. And then it asks about your perception of men who knit.

You can take the survey if you're a knitter - or crafter. It's interesting if you like surveys. A guy named Kyle Kunnecke is going to write a book on men and knitting. It's always nice to help a guy out. Go on over if you're a crafter. Feel excluded if you're not.

I'm really glad that today is Friday. Somehow, the bulk of my work got pushed to the end of the week for the next several weeks, so it's completely the opposite of what I would prefer, which is to have the end of the week less busy. It's a lot of work to figure out how to manage it. (It's almost like working in an office the whole week, but it's exhausting in a different way.)

I bought the yarn in the picture a few weeks ago because it was pretty and because I'd heard good things about Manos Silk Blend. Then I proceeded to search for a pattern. After several attempts at finding a pattern, I found one on Ravelry. (Ravelry again?) This pattern is called the Lace Rib Scarf. Not the most exciting name, but it's an easily-memorized four row repeat - definitely what I was looking for.

One side has a rib pattern and the other side has a sort of a lace pattern. It doesn't really look that lacy to me, sort of cabley, but not really. It's sort of a girly scarf with a boy color. It's not for me. It's just to use up the yarn. The idea was to have this going for times when I needed something simple I could knit and not have to think about - like for Stitch 'n Bitch. I need to get back to my aran sweater because I want to finish it because I want to do a lace shawl. I'm itching to do some real lace.

That's sort of what I love about knitting the most. There are constantly new projects to start and finish.
Posted by Andy Baker at 6:20 PM

I just finished a Manos Silkblend project and it feels wonderful. [Subject change:] Recently seen: a pickup with a license plate frame that read: "Knitting takes balls." I assume that the truck owner was 1. a man, and 2. a knitter. :-) -christina