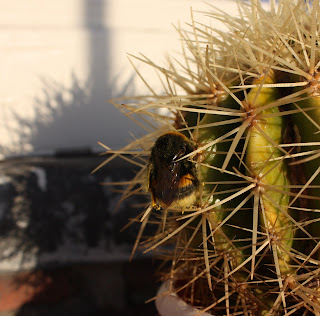 I walked out on the balcony a few minutes ago and a bumble bee had apparently taken a fancy to the cactus. It reminded me of a cartoon I once saw that had a snake (with glasses and poor eyesight) trying to cozy up to a garden hose. I can't imagine what this bee was hunting for. It sort of looks like he came in for a landing too quickly. Not worry - he eventually flew off. Apparently, he really did have some business there.

This afternoon after work, I went to get on my bike and I couldn't find my keys. I looked in all my pockets and felt around in the pockets of my bag and they were just gone. They were supposed to be in the pocket of my jacket, where they always are. I thought about where my jacket had been laying. It was just on a desk in the room the whole day. I thought they had probably fallen out.

While I was walking up to look for them, I considered the possibility that one of the students could have taken them. You know, there are students who your mind just goes to when things like this happen? And I really couldn't think of anyone. I can't imagine any of my students being the kind of person who would steal from me. I like that. I have some really good (and sometimes maddening) kids.

They keys turned out to be in the bottom of my bag - where they never are. It sucked to have to go back up to my room, because I was carrying so much stuff, but it was a relief to have them and get on the bike to come home.

My students have been on my mind lately because they've been so nuts. They're antsy and they want to be out of school already. But they were all on good behavior today since I had a little "come to Jesus" talk with them. It was nice to have them calm and cooperative, if a bit somber.

I feel like I grew a new teacher muscle with these talks I've been giving. This job has been exhausting. It's so much work, but it's fascinating because sometimes I can step outside of myself and watch myself and the way I am with them. I am so much the way I am.

It has been a beautiful day. Sunny and clear with a little crispness in the air. It makes for a stuffy room in an old building, but it was nice when I opened the windows to get some fresh air. I look forward to sleeping in a bit tomorrow.
Posted by Andy Baker at 6:03 PM