Lyle Lovett at the Paradiso 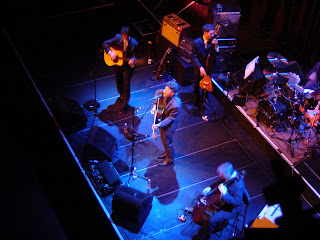 There are very few things I've done for twenty years. My life is a life of pretty consistent change. Friends, jobs, interests, the places I've lived. I keep moving and I keep doing new stuff. However, I have been a Lyle Lovett fan for twenty years. Over the years, when people have asked me what kind of music I listen to, I have pretty much always said, "Do you know who Lyle Lovett is?" One of my first passwords was lylelove. That was back before they started making you use letters and numbers.

I first became aware of him in 1988. I was working at the now defunct Caravan of Dreams in Fort Worth, Texas. Lyle Lovett and his Large Band were there for five nights - two shows a night. I was waiting tables and I got to see all ten shows. It was wonderful. Not all of the shows hit me like that. (A lot of the bands they booked were very mediocre.) When I moved to NYC a few months later, a friend gave me a tape as a going away gift. I wore it out.

So I was really happy when Fred was looking through the paper a couple of months ago and he said, "Lyle Lovett's going to be at the Paradiso." And I was even happier when he told me a bit later that he'd bought two tickets.

The Paradiso is a really nice venue for listening to music. Fred and I have been to a couple of concerts. We've also seen Nanci Griffith (another Texan) and Rufus Wainwright. Of the three, this was the first one that Fred walked out of saying that he wanted to put some of the music on his ipod.

We sat on the second balcony right over the stage so we could lean on the rail. They played for two and a half hours. He's an amazing lyricist. And he's got a very dry sense of humor. He talks a bit between numbers. He's very genuine. He makes me proud to be a Texan. Here's a little sample of one of his lyrics:
Shelly - she's got big ones.
Sally's got some too.
Allison's got little one
That hate to go to school.

I love that stuff.

I've been a pretty heavy podcast listener for a while now, but seeing him on stage made me want to start listening to his music again. Fred didn't say anything, but I sang along to quite a few of the songs - loudly.

There are few things I miss about Texas - apart from some people, like my lovely sister. Seeing Lyle tonight made me think back to the Fort Worth years and how much fun that was. If you're not acquainted with him, his website has some of his music and videos and IMDb (don't tell me you don't know about IMDb) has a list of all the acting he's done. It was a really nice night.
Posted by Andy Baker at 11:40 PM

Try Robert Earl Keen (if you haven't already), longtime friend and school-mate of Lyle's, and James McMurtry (son of Larry), both stellar song-writers.

(BTW, my word verification is "ferettyp" and I'm wondering if the web is reading my mind. I've always had a thing for those little critters.)

Kelly, who loves your blog and your knitting, and who you don't know.