Working for the Man 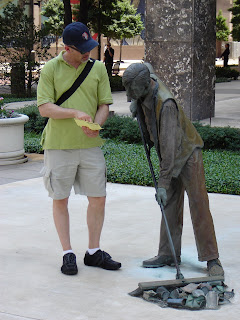 Coming home tonight, I heard a story on NPR (from yesterday) about job fairs in the US and how jobs that aren't normally in demand are being mobbed with applicants. The specific job they were talking about was something at an animal shelter, something that entailed scooping poop. The administrator they interviewed said that most of the applicants had college degrees, a lot of them had masters degrees and there was even a guy with a law degree. Granted, it was in a small town somewhere in the Midwest (Michigan?), but geez! There must not be any jobs.

I've been in that position a couple of times. The last job I had in NYC was as a temp secretary. (Look for my new novel I Was a Male Temp Secretary in book stores soon.) Then when I got my working papers here, I took a job as a personal assistant. (I kept a separate blog for that one that started the moment I walked in the door to right when I left. It would make a fairly interesting book if it wasn't such a depressing story.)

I've had two networking meetings this week. It's amazingly helpful to talk about possibilities with unconcerned third parties. I came away with lots of new ideas both times. I've got this new freelancing status, so my opportunities have just opened up.

Years ago, when I went to the many many get-a-job workshops and seminars that I attended after leaving my art therapy job, I heard people talk about making the work you want to do. That didn't make any sense. I felt pressure to pay the rent, which sort of stifled any creativity I had regarding thinking outside the box - or whatever cliché you want to use. Now I have a job that gives me a regular, if not giant, paycheck, and I have another job that is bringing in a little bacon, though less lately. The rent situation is also a little (read: completely) different. I feel more possibilities than I ever have in terms of getting additional work, so my mind is ready.

When I asked his opinion on getting work in "this economy," one of the people I talked to said, "Oh, there's always money to be found." I like hearing that. Of course he later suggested that I quit both jobs and work solely on finding this other work. "You know, make it real sink or swim situation!" Yeah...take what you want and leave the rest. I left that one.

I think I could scoop poop if I had to. I could even work as a PA for a crazy Polish guy, an snippy British guy and a blond American woman (I'm just pulling those out of the air) if I had to. But I think it's time for something that I'll enjoy doing, something more along the lines of what I'm doing now.
Posted by Andy Baker at 8:41 PM