A Day in the Bulb Fields 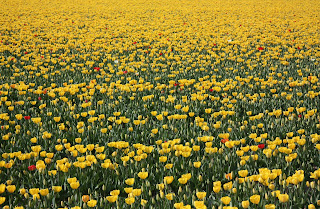 Fred and I took the day off today to ride our bikes through the bulb fields and go to the Keukenhof. (There was no connection, but yesterday was Fred's birthday. And my niece, Allyssa turned 16 yesterday. So belated Happy Birthday to both of them.)

I'm in my sixth year of living here and I had never been to either the bulb fields or the Keukenhof. Seemed like a pity. Now we've done it. (Fred for the first time in 20 years or so.) The problem with the Keukenhof is that it's only up and blooming for two months of the year. So everyone has to go then. If you go on a weekend or holiday, that just compounds the throngs of people. Go on a week day. It was just Fred, me and a lot of white haired people. If you haven't had a day in the bulb fields or at the Keukenhof, regardless of where you live, you ought to go. It's really something. Even at the end of the day, we were stopping and saying, "Wow. Look at that!"

In case you're wondering the route we took, I'll tell you. We rode our bikes to Amsterdam Central Station (after rush hour) and took ourselves and the bikes to Haarlem Central Station. From there, we rode through the bulb fields to the Keukenhof. Fred's brother-in-law estimated that it would be a two-hour bike ride. (Later, I said, "Thank you for not telling me that.") It was more like an hour and fifteen minutes with lots of stops for taking pictures. You could probably do it in two hours if you were Nordic walking, a favorite pass time of Bart.

And while it was just riding the bike along very flat stretches of farm land and leisurely walking through the gardens, we were really tired when we got home, and it may be an early night. We were gone for twelve hours, and other than sitting down to eat breakfast and supper, we were moving the whole time. I'm going to write about the bulb fields here and the Keukenhof tomorrow. 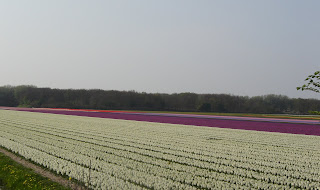 I have to say that riding through the bulb fields on a bike - if you can - is the way to do it. You go at your own pace and you can ride where you want. I was sort of amazed that the fields were so open. Of course people are very respectful that these fields are someone's private property and someone's living, so it's not a problem. They just walk in, take a few snaps and leave. 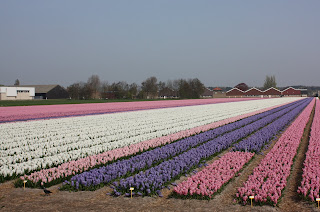 This is a field of hyacinths. If you like the smell of hyacinths, this is the place for you. Of course, after a while, it's a little bit too much. It reminded me of Hershey, Pennsylvania. They say it smells like chocolate there all the time. Chocolate smell is nice for a while. Same with hyacinth smell. It smelled like an old lady who was wearing too much of a really flowery perfume. But it was beautiful - and I like hyacinth smell. It reminds me of Patty. 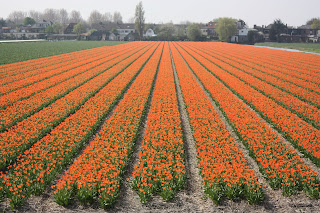 These are tulips. Orange tulips are not my favorite, but when there are thousands of them in a field, I like it. Some of the flowers on the route were in full bloom and some were not yet blooming. Still others had lost their bloom. I bet we could go back next week (we won't) and it would be really different. Incidentally, there are all kinds of flowers out there, not just tulips and hyacinths. We saw daffodils and a few other kinds of flowers. But I guess bulbs are really the point, huh? 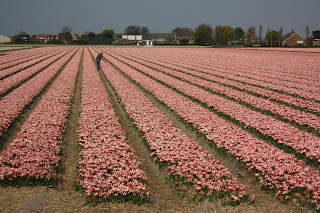 I love seeing a farmer in his field. It doesn't seem like there would be a whole lot to do when your whole field is covered in flowers, but we saw a couple of farmers out walking the rows looking at something. Pests, maybe? How dry the soil is? We also saw a couple of guys in a field of dark tulips plucking out some white tulips that had gotten into the mix. They waved and asked if we wanted any. We did not, but a lady biker stopped and took a handful. 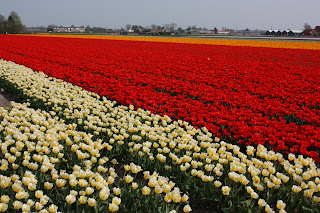 Before experiencing this first hand, I imagined that these fields would be all packed in together. They're definitely in the same area, but they're just speckled here and there, some small lots and some larger. There doesn't seem to be any method to what's growing where. But people live there and there are businesses. It's not just fields. 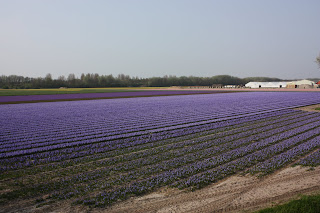 Not being a farmer and all, it didn't occur to me that the flowers in these fields are not for consumption (consumption here being defined as cutting and putting in a vase in your living room). Apparently (please correct me if I'm wrong) if you just let them grow and get through their whole life cycle, when they die back down, there are more bulbs. Propagation, I believe we call that. When I first heard that, I thought, I had no idea. It makes sense, but I hadn't thought of that. They probably do something with the stuff that's left over, right? I mean, it is the Netherlands. Check out the two purples in this photo. 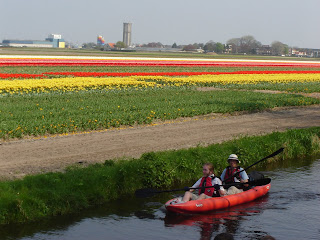 It was just flowers and nature (and crowds) the whole day. (Well, the bulb fields had no crowds to speak of, but the Keukenhof was mobbed.) The sky in some of these pictures looks a little gray, but it was a beautiful, clear day the whole time.

Again, if you haven't done it, you should. The bulb fields should be on anyone's Things to See Before I Die list. It's worth the effort. Fred swears he won't go to the Keukenhof ever again, but I bet I'll get him to the bulb fields next year.
Posted by Andy Baker at 10:30 PM

Have I told you how much I love hyacinths? I must have. I would love to see all those hyacinths, and all of those flowers. next time....