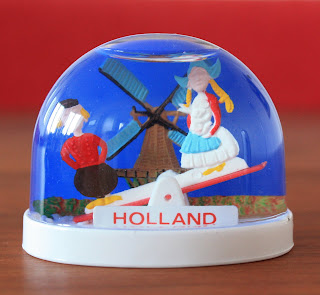 Dinner last night was - by all accounts - a success. It was a very nice group of people, some of whom we've had over before and two who we have not. Alastair brought me a snow globe he'd picked up at the Keukenhof. It's a scene of everyday life in Holland. It's quite realistic. Thanks, Alastair!

Dinner started with a red onion tarte tartin with goat cheese and then had a nice salmon dish (a bunch of stuff on top, wrapped in filo dough and baked) with some green beans and mashed potatoes. It ended with a flan. Everyone left right after midnight.

I woke up first and walked into the kitchen to find this. 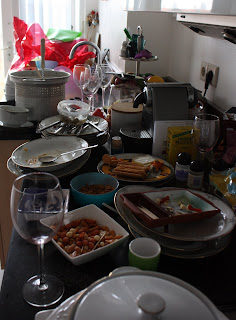 Sometimes we stay up and clean the kitchen and dining room. We didn't feel like it last night. We just sat for a little bit and then went to bed. All morning, I was humming There's Got to Be a Morning After. It reminds me of The Poseidon Adventure - one of my favorite movies.

Someone last night mentioned that same sex marriage will be legal in Iowa as of April 24, 2009. I said, "Iowa?!" It's like the most random state. I didn't hear anything in the run up to this. Usually I hear or read something. So that's good news. I like surprises like Iowa.

Down with bigotry.
Posted by Andy Baker at 7:41 PM

Oops. Now I feel like we should have offered to help clear up. But it really was worth the effort. Especially since the effort on my behalf was minimal!

Dinner was very nice indeed and for the record, you can add vermont to the list of american states that have legalised gay marriage!
P.S. did they say anything on Northern Exposure about guests who show up irritatingly ontime?