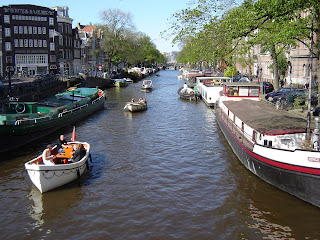 Spring in the Netherlands is a whole string of national holidays for months. Lots of odd days off that I'm not used to. For instance, today is Hemelvaart [pronounced: Hay-mul-fahrt] - Ascension Day. Hemelvaart and the rest of these religious holidays are a holdover from when the Netherlands was a religious country. Now it's mostly a free day when some stores are closed and some are not. In the center, a lot of the stores were open. It's the rare person who actually observes Hemelvaart in a religious way.

We had planned to make a long bike ride today. The weather was supposed to be sunny and clear. Fortunately, or unfortunately, it was a little overcast until the afternoon. So Fred didn't get moving for a while. It was me who finally said, "Okay. We have to do something. Let's at least go to the Center and walk around a bit."

The Center was sort of busy. It wasn't crazy, but people were out. Lots of boats in the canals. people in shops, etc. Fred's off tomorrow too. It's that Friday after Thanksgiving thing. Might as well make it a long weekend.

We did a lot of nothing today. I knit a lot on a something I'll write about later. I also watched Weeds on the computer after a friend told me that it was really good. It is. I like it. I'm hooked. Fred looked stuff up on the computer and took naps intermittently. After we'd walked around the Center for a while, we came back and we were right where we'd started the day - on the couch with our computers in our laps. I made one of our favorite pasta dishes and then we watched a couple of episodes of The Wire. (We're in the middle of Season 3 and we own the box set.)

When I took the picture at the top today, I said, "How many pictures like this have I taken?" Bridge, canal, boats. Done, done, done. Still, I feel compelled to take another picture every time we're out and about.

We have to do something tomorrow. I've got tests to grade, but if I just sit here again the whole day I'll be disappointed at the end of the day.

I have a friend who used to laugh and laugh at the mention of Hemelvaart - for obvious reasons. Fred just said to me, "It's not Hemel-fart. It's Hemel-faaht."

It means, literally, Heaven-journey, by the way. The only bad thing about all of these holidays is that they come to an abrupt end in a couple of weeks. Then there's nothing until the Autumn. Enjoy it while it's here.
Posted by Andy Baker at 10:34 PM

Weeds is such an awesome show! I'm eagerly awaiting the new season, which should start within the next few weeks :D

What about those other holidays they have in Holland?
I think they are called the "Tulip Holidays", in dutch offcourse, - Do you know anything about the background of these holidays?

As financing gets tighter and the stress continues for all those apartment buying financing. Manny of New York City management companies and NYC developers looking to list out their condominiums (Condos), Lofts and apartments for rent as a NO FEE Rentals all Over Manhattan including Battery Park, West Village, Chelsea, Tribeca, Financial District, Flatiron, Hudson heights, UES, UWS. New York City Apartments

Spring is one of the best season in Amsterdam for the holidays in city.

Prediksi Poker Online
A fascinating discussion is worth comment. I think that you need to write more on this topic, it might not be a taboo matter but usually folks don’t speak about these topics. To the next! All the best!!
http://jinprediksi.smeagol.web.id/itudewa-net-agen-judi-poker-domino-qq/

The best, the biggest and always be favourite.. this is Autospin88.
you can prove it and feel the excitement..

Guys, always lucky, always profit and always here for you as loyal members of Elanggame.
You can get the exclusive merchandise and bonus lot of bonuses.