On Over-priced Coffee and Coincidence 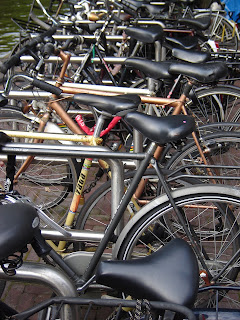 And just because I am the way I am, when we returned home, I went to the Starbucks website and wrote a note:

We were in Starbucks when it was crazy busy. There was a constant flow of people. The people behind the counter couldn't have been more friendly and helpful. They were smiling and ready to do whatever they needed to do to make us happy. Their English was also really good - one young woman in particular (but I didn't get her name). I wish the Starbucks crew at Schiphol were as nice as those Polish kids. It made me really happy because I've enjoyed Starbucks for a long time and I miss it living in Amsterdam.

I think it's important to not just write complaint letters, but to write good letters. I started that years ago when I first got a word processor. I wrote letters all the time. "Thank you for putting such and such on television," etc. It was a hobby. I didn't have knitting back then.

Yesterday, I got an email. It said:

Thank you so much for taking the time to share your thoughts on our new store in Warsaw. The team there has worked long and hard to bring Starbucks to Poland, and they very much appreciated your positive feedback!

By the way, your wait for Starbucks in Amsterdam will not be long. I live in Amsterdam as well, and share your feelings! We are planning to open a store in Station Centraal. The opening has been delayed due to construction, but keep watching!

I said, "Hey, Fred! I got an email from Starbucks!" It's a little thing, but it was rewarding for me. But that's not the end of the story. Monday night and tonight we had rehearsals for a one-off men's chorus that will be singing this coming Sunday. I'm a first tenor, and the other first tenor and I were expecting a little support from a third first tenor named Andrew. He showed up tonight. Nice guy, good singer.

After rehearsal, we were walking out and I said, "So why are you here? Work?"

I said, "You just wrote me an email. About the Polish kids...in Warsaw?"

Small world. And as a side note, there's going to be another Starbucks in Amsterdam! Over-priced coffee comes to the Netherlands! Double tall cappuccino, please!
Posted by Andy Baker at 11:04 PM

Funny. I seriously can't believe that there isn't already a Starbucks in Amsterdam. They're on the freakin' Great Wall of China, after all.

Andrew is a very pleasant chap, and I wish him well, but one of the nice things about the Netherlands is that there isn't a Starbucks on every corner.

Their coffee's fine (if not spectacular) but why does every country need to be the same? There is no shortage of lovely coffee in this country - why do we need Starbucks?

So, when every high street on the planet has its McDonald's next to KFC next to Starbucks next to Pizza Hut, won't we have lost something?

Alastair,
What is the name of your future blog ? I would like to be the first to become a follower.

It certainly is a small world. I have run into a couple of people just like in your scenario a couple of times already. It's kinda funny.

I doubt I'll ever have a blog, Anita - I so rarely have anything to say that anyone would want to listen to.

My main skill is making snippy comments on Andy's blog, I think.

oh wow, what a small world!! I guess you know that you'll already get along fine, then!

When I lived abroad, i found I loved Starbucks a lot more than I do now that I'm back in Canada. Whenever I felt a little homesick for my culture, Starbucks made me feel like I was at home. I realize it's the homogeneous decor and cloned menu, but still- comfort is comfort. And in the summertime, the Vivanno banana chocolate is divine.

I love a good Starbucks now and then, but it's not one of my splurges. That is very bizzar that you met the actual guy that emailed you. You always amaze me with all of your stories! I love you! Kathy

Firstly...what a lovely thing to do, writing compliments letters. I quite agree that people are quick to complain but not to compliment, certainly not in writing! Well done!!

As for then singing with the bloke who emailed you from Starbuck's....very very small world!

I love that whole 'small world thang'. No Starbucks here in Kirkcaldy..we only drink Iron brew (or Buckfast if its giro day)dont you know? lol