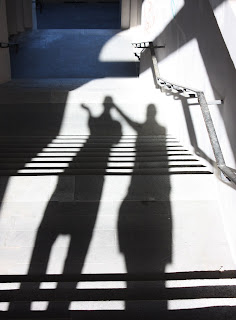 Last night I watched The Celluloid Closet again, which is sort of great for knitting because there's all that looking up and down and I see parts of it that you didn't see before, or I put a voice with a face when I see it again. It's lots of short clips, so it's new all the time. Fred was in class.

Anyway, at one point, Quintin Crisp was talking. He lived in NYC while I lived in NYC. I saw him one morning when I was at brunch with some friends. He was dandied up like he always was with his lavender hair all swooped up. It's always fun to see an icon in person.

In the film, which is about movies, Mr. Crisp says, "Everyone who comes from England to America and goes back says one thing: It's more like the movies than you'd ever dream!" Then he smiles and nods and says, "And it is."

I know exactly what he's talking about. When Dutch kids see movies about American high school, it looks sort of made up and not real. Girls really walk the halls in those cheerleading outfits? And there are really big high school football games where the band marches? People really care about who their student council representatives are? Yes. Yes. Yes. I always smile and proudly say, "It's just like you see it in the movies." Yes, the directors pop it up a notch, but I'm not sure you could tell the difference if you were seeing it for the first time.

Similarly, living in Europe, for me, is often like standing in a postcard. There are many times when I've stood on a bridge or on a street corner and thought, "This looks like a photograph." Sometimes it's amazingly easy to take pictures. I just raise my camera and shoot. It often feels unreal. There are many times when I've wish I had a certain friend with me to enjoy it. Alas, I have snap pictures to tell them about it.

My life path took a sort of a wacky turn years ago and I'm really enjoying where it's taken me.

That picture, by the way, is of me and Fred at a stairwell in Warsaw.
Posted by Andy Baker at 5:15 PM