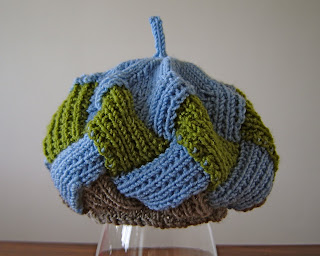 Last week or so, I wrote about experimenting with entrelac. I thought it might be good for a baby hat. I think it is. I think it'll work. This was my first experiment. When I finished it off, it began looking like something. It's a very cute hat. This particular color combo is a bit distressing to me, but I was using what I had left over. I didn't have enough of that green (which, for some reason, is bothersome to me here) to go all the way around, so I used a bit of that tan. That blue and green would be nice for some earth/globe idea, if you just wanted to knit a silly baby hat. 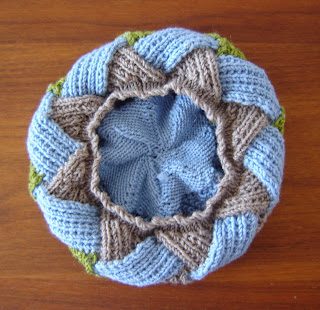 Entrelac is really not difficult at all. I thought it would be, but it's not. I picked it right up by reading about it in Son of Stitch 'n Bitch - a book that has been oddly useful since I bought it. I read it all the time. Part of what makes the hat work, I think, is the stitch pattern, which is just a K1 P1 on one round and a knit on the other; it's fairly loose. Someone looked at it on Monday and said, "It looks really loose." Being loose is different than looking loose. I think I would prefer plain stockinette. My next experiment will be stockinette and I have a couple of ideas about what to do with the color, as seeing it like this makes me thing of something that I won't say right here. It could be sort of funny. I'm going to try it. I'll keep you posted - if I haven't lost everyone at this point. (I like the star thing that's going on. ) 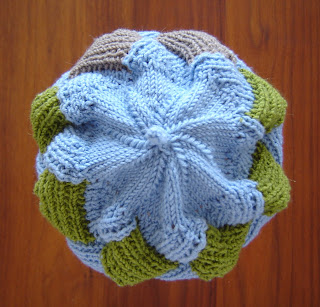 I'm also working on an Elizabeth Zimmmerman Pi Shawl. I linked there to Brooklyn Tweed's blog. He made a beautiful and beautifully-photographed shawl/blanket with the the pattern I'm using. I would link to a shawl with the pattern that is more my speed, but those all happen to be the other pattern. Anyway, it's good, straight-forward plain old knitting with some yarn overs. I'm going great guns on it because I can feel that I'm making progress and I want desperately to get to the color change in the yarn. I'm using the yarn below. It's really beautiful and sort of oily. I like knitting with it. It feels strong, sort of masculine (for lace knitting). I asked Fred how he liked it. He said, "So you're finally turning into a real old lady." 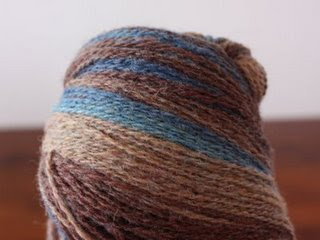 Mine "shawl fetus" (it's all pre-formed and curled up like a baby in a womb in the middle of that circular) currently looks like a ball of crumpled up yarn, which I know all lace projects are until they're blocked. But mine feels especially ugly right now. I think it's going to be reasonably big. I hope so.

This yarn, by the way, was a mess to make into a ball. My ball winder (I'm currently typing with my ball winders) got all messed up. It took me literally three and a half hours. But I got to know the yarn intimately and I really like how it feels. It's Eveilla Artyarn 8/2. It's a purchase I made in the Fall that I am really happy about now.

You know, sometimes a guy just needs to write about his knitting. Thanks if you got his far.
Posted by Andy Baker at 6:31 PM

I love the hat! I've always fancied doing entrelac but never have...Mmmm maybe this has been the inspiration to start...

Interesting looking hat, I guess now I'm going to have to look into entrelac.

By the way: I love when you write about knitting. Your last post inspired me to start blogging and knitting again, so it's nice to get a mix of topics from other blogs at the moment.

I LOVE the Artyarn 8/2. I am fully confident it will block out wonderfully and not be grandmotherly at all!

And thanks for adding me to your 'knitsibs'

very cute hat!! And you're right, it does have a bit of planet earth colour choice going on. That yarn you are using for Pi is gorgeous- the colourway is going to look amazing, I'm sure.

So glad to see that you were knitting around the world for WWKIP day. The event in Fort Worth was tempered by hot weather.

I have only attempted entrelac once and thoroughly enjoyed it.
http://www.ravelry.com/projects/acsparky89/lady-eleanor-entrelac-stole

Hope all is well

Thank you very much.
Your blog has really helped me in gathering the information I needed.