T is for Tegels 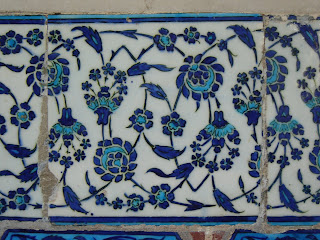 Tegels is Dutch for tiles. Interestingly (or not), on the little translator widget on my Mac, if you type in tegel, it give you flag as the English definition, but if you switch it, flag becomes vlag in the Dutch box. And if you type in tile in the English box, you get tegel. I knew I was right, but someone needs to take a look at that widget. Glad it was a free widget.

A couple of years ago, when Fred and I were in Istanbul, I took a lot of shots of the tiles that lined the walls of the buildings. They were just covered in tiles - and I'm pretty sure these were built in the days before Henry Ford and the assembly line, although there must have been some assembly line process to make all those tiles. There are zillions of them. And they're really beautiful and in pretty good shape. 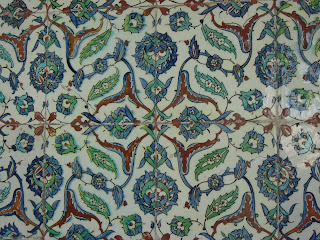 Years ago, I worked in a ceramics factory that boasted that all of its pieces were hand painted. It was one of those jobs that I, as an art student, got thinking that it was so nice to have a job where I can actually use my art ability. And then it quickly became a chore because I was drawing the same stuff on these pots over and over making crap money. And I always went home covered in clay dust and glaze.

Interestingly (and isn't this all interesting?), if you follow the link, you can see the actual stuff we were making.

Anyway, after I took my pictures (not a completely original idea, I know) in Istanbul, I noticed a couple of other people taking pictures of tiles. It's so nice to inspire.

P.S. Instanbul is really nice for a long weekend. Tons to see and it's got a very exotic feel. 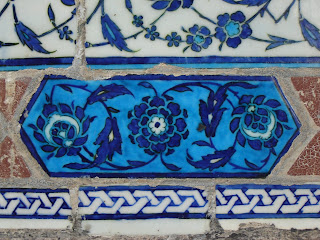