I started a sweater last Monday evening. I'd bought some yarn (Cascade 220) from a local friend at Penelope Craft because I found an Elizabeth Zimmerman sweater I wanted to make.

One of the things I want to do before I die is to make a sweater that I can actually wear. In case that made any of you think Is there something Andy hasn't told me? Let me tell you that yes, I did get an estimated expiration date on Friday. It was a little bit of a shocker.

So according to his estimation, I have around 33 years to complete a sweater. I started a Tomten jacket, but it is so much knitting, and the yarn got so heavy that I took a break to do some gloves and the sweater is still on a break. These cables and diamonds are keeping me much more entertained - and that's sort of what it's all about. 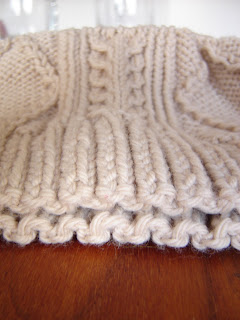 I'm crazy about this edge. I used a long tail cast on - against the advice of a knitting buddy - and immediately started in with the ribbing. 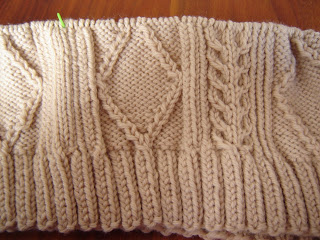 This is the basic pattern that will go up the front and back - sans the ribbing. The arms are a little different, but they use the same cables. 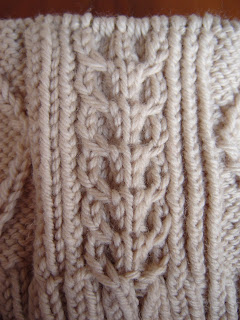 And this is a closeup of a fish bone cable, my new favorite. (It's totally easy.) I've started the next diamond and I must say that it's a really engaging project. I'm finished with one round and I'm ready to do the next.

And when it's finished, I'm going to steek it. Yes, I'm going to cut it up the front and add a button band. I'll keep you posted.
Posted by Andy Baker at 12:26 PM

That is beautiful...if only I had the knitty talent to produce such a sweater. I have just learnt to do basic cable but 2009 is the year I will produce a wearable sweater for myself (yeh well I said that for 2008 but lets not get pernickity ,right?). Well done look forward to seeing more pics as the knit progresses.