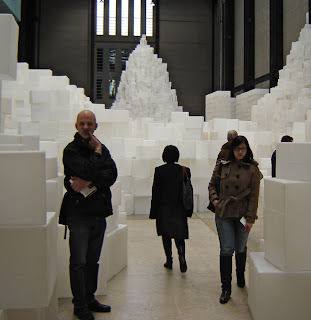 One of the first things I remember learning from other students when I was taking Dutch class was the word, "doei." [pronounced doo-wee] In class, we'd learned that the appropriate way to say good-bye to someone in Dutch is "dag" or "tot ziens." But some of my fellow students - in their enthusiasm to integrate - had heard people say, "doei," so they picked it up. It's sort of said in the same "sung" way that "bye" can be said. I think it's a major third - going down.

And some people say "doei doei!" which I find really annoying. There was a guy who worked in a shop near Fred who would say that all the time. And we saw him so much that it was difficult not to just parrot it back to him. It's the kind of thing that's difficult to not say back when someone says it to you. It's so quick that you don't even think about it.

Early on, Fred put a kibosh on "doei doei" and pretty much even "doei." It just sounds so ridiculous.

Supposedly it came from the south of the country - interesting how they get blamed for things. I've heard that it comes from "Dag" which then turned into "Doeg" (which people do say) and then it morphed into "Doei," like a sea creature that has been exposed to radiation and needs to reproduce in order to live.

Really? Good bye, or another kind of bye? Language is silly, isn't it?

I thought of this because someone said it to me yesterday and I repeated it back before I cringed and swore it off again.
Posted by Andy Baker at 6:52 PM

I live in Noord Noord Holland (above Hoorn) and people here say 'Do'. Rarely do they get as far as 'Doei'.

Thanks for keeping this blog. I know I've said it before, but I think you are a great observer of the Dutch Life.

My newsagent goes for a sort of "do-do" said very quickly. It just seems like a friendly sort of thing to say, so I say it back.

"Good bye", as I'm sure you know, is a corruption of "God be with you". On that basis, it's a rather nice thing to say.

I love when Fred puts the kibosh on things. It's what makes him so cool.

Heard 'joep doei en de mazzel' yet...?!
My 6 year old has worked out that when I speak to him on the phone, I say 'dag' to mean 'hello' and 'daag' to say 'goodbye'. 'Tot ziens' for me is more formal, for people I don't know that well; 'doei' or 'doeg' (which I prefer) is for people I'm close to. But having worked with Dutch people from all areas of the country for the past 13 years, I've found that it really depends on where you're from what you say.

This was a funny post. Where I grew up (zuid-holland) we said doeg. In the 'real' south of the netherlands they say houdoe. All the way up north (Friesland/Groningen) they say something like hooi of hoeie.
So it totally depends on where your roots are. Doei is more like a combination of everything.

I love that photo..very arty. You look like you are 'working it'. Netherlands Next Top Model?

Funny post! We have taken to saying "double doei" in jest. I agree, it's hard to say it, and it's hard not to.

But "goodbye" evolved from "God be with ye"