The Americans Have Landed 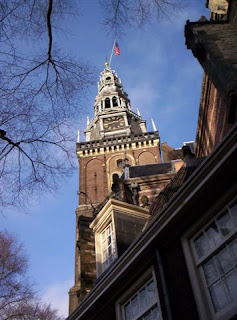 A week ago, my friend, Alastair, sent me this picture. It's the American flag high atop the Oude Kerk (Old Church) in Amsterdam. People here were generally very happy to see Obama inaugurated. I'm not sure if they would have flown the flag if it had been McCain. I don't remember seeing a flag when Bush was inaugurated the second time. People were probably crying and gnashing their teeth so much that no one had the energy to climb to the top.

When we sing in a church service, I often stand directly under the American flag. The church has a number of flags from English speaking countries hung around. There's a Scottish flag that it pretty threadbare, but it's made from natural fibers. And there's a giant orange flag representing The Netherlands (which is not an English speaking country, but it's where the church is located.) The Canadian flag is small and polyester and the American flag is big and polyester with gold fringe. There's no South African flag and no Australian flag. I think there's a Union Jack somewhere. If there is, it's a zillion years old and is well worn, like the Scottish flag.

With Sally gone, I am the only American in the choir. There are a couple of Canadians, but just like in North America, they don't really count. I'm kidding! (...sort of...) Take the joke!

I think it's interesting that during performances I get to stand under the American flag. I like it. I like that with the randomness of where they might have put the flag and the where I might have been asked to stand, I'm under the flag.

As an adult, I haven't been the most patriotic person. I wouldn't say that I've been anti-patriotic. But as an adult, I've just been keenly aware of where the rhetoric (All men are created equal) stops and the reality (gay people can't marry, etc.) begins. I just haven't been a real flag waver. I appreciate being an American, but I realize that it's just one country out of many and it's not a perfect place.

Lately, I feel a little differently about the US. I know there are still a bunch of ass wipes like Rush Limbaugh around (pardon me, I just threw up a little), but it's nice to see people filled with hope. And it's nice to not have to make excuses any more for all the stuff Bush was pulling. I think a lot of people don't think about how having a really good president can improve the lives of people living over seas, but it does.
Posted by Andy Baker at 7:08 PM