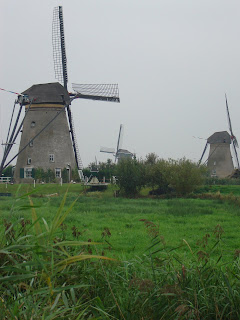 I've officially lived in Amsterdam for five years today. How did I celebrate? I went to work and Fred will be home at 9:00 PM at the latest - because he's got a lot to do. It's just a regular day. Every year Fred swears my anniversary is the 21st (the day I left NYC) and every year I say, "No, I'm sure I landed on the 22nd."

So much about my life has changed since I moved here. I am gainfully employed, I have a decent social network, I speak a bit of Dutch...and I blog. I'm also knitting much more and much more creatively, and my writing has been published a few times. I couldn't have had the life I have here if I'd have stayed in NYC. It would have been completely different. I would have enjoyed it, but it would have been a completely different set of circumstances. For instance, I lived in a studio apartment there and here...I don't.

When I think about having moved here, I just roll my eyes at the nutty guy who made a decision like that. (Seriously? Drop everything and move to Amsterdam at 38?) And I marvel that I was able to get it together (emotionally and physically) and move. Of course Fred has been a huge help in helping me acclimate. (I literally couldn't have done it without him.)

Moving here closed the doors on my career in health care. I had waning interest in health care and getting up to speed in the language department in a timely manner would have been possible, but the payoff didn't feel worth the effort. But moving also opened a whole slew of doors in terms of teaching and writing.

I wouldn't have had a chance to teach in NYC. That would have meant a lot more schooling and I wouldn't have bothered. And there are almost as many writers in NYC as there are actors - maybe more. So I've moved into a much smaller pond in terms of the number of native English speaking writers, increasing my relative size - from plankton to a small trout.

I've also gotten the chance to see behind the curtain of Dutch society, which is alternately fascinating and maddening. It's not that difficult to do, but I don't think you see much of it as a tourist. I live with a Dutch guy and I get to be around his (oh-so-very) Dutch family and a variety of other (oh-so-very) Dutch friends. My students are all Dutch and I get to discuss various aspects of Dutch society with them. The differences are sometimes subtle and sometimes astounding.

A couple of weeks ago, during a particularly lonely, gray day, my mind was wandering when I suddenly gasped and thought, Oh my God. I left New York City! It's still shocking to me on some level - obviously. (Funny how I never did that with Texas.)

It's amazing to me the connections (in the US we'd just say 'friends') that I've made in five years. I don't know what I'd do without the people I know. They are so important - and most of them are ex-pats, which is a really different kind of person, but there are some natives that I would count in the mix.

A move like this is just another one of those fork in the road moments. If I hadn't done it, it would be just a foggy speculation of how it would have been. But as an old sage (he was 38) named Billy once said, "It couldn't have gone any other way because it went this way. And this is where you are now."

So maybe it was inevitable that I moved here. At any rate, it's been an interesting five years and I'm looking forward to many more.

Okay. Introspective moment over. The snark will return tomorrow.
Posted by Andy Baker at 5:28 PM

Happy anniversary! I'm a couple of months ahead of you, but I still can't figure out why I moved here. 'Course, I don't have a Fred to help me... :-(

As much as I miss you every day, I am so happy you are where you want to be. You were in NYC so long that I didn't have the seperation and we talk and email so much that I think you could just be down the street...but I would see you more. I should have come to NYC more but I love visiting you in Amsterdam.

Hello.. Do you know how to Add Adsense Code Inside Single Post Only in XML Template? Visit your blog to learn how.. Have a nice thursday!