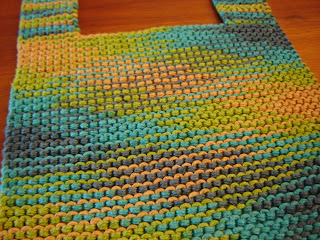 Last Sunday, I attended a yarn exchange organized by Alex and attended by several people from my local knitting group. The basic idea was that you bring two packages of yarn wrapped up and then play a game and the yarn would get exchanged. Alex has a post on her blog with pictures and a better exclamation of the game. She's also posted a picture of one of my "dirty little secrets." (You have to imagine that I'm saying "dirty little secrets" like Austin Power would.) It's not actually a secret. It's just not something I advertise. Souvenir from days gone by.

My goal in the game was to come home with different yarn and less yarn. When the buzzer rang, I had three balls of cotton yarn. One sock yarn, one chunky turquoise, and one that's a really nice cotton and is variegated in some nice colors. A day or two later, a friend called to say that she had had a baby, so I started making a bib. I'm a fan of these bibs from Mason-Dixon Knitting. I'm just crazy about this cotton in a garter stitch. It's so sturdy. And the colors change nicely. 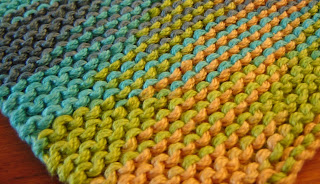 The one little pity is that none of the yarns came with ball bands, so I have no idea what the good one is. I'd love to get some more. The others are pretty obvious.

My package was well received, which was good. Before the party, I said to another woman, "I just hope that I don't bring the crappiest yarn." She said, "Don't worry. Someone else will out do us both." But when we mentioned that later at the party (before the game) the woman who said she'd brought the crap turned out the woman who brought...the yarn I got.

This is a great night to stay in, anyway. It was a long busy week. Plus, I have knitting I need to get to.
Posted by Andy Baker at 8:50 PM